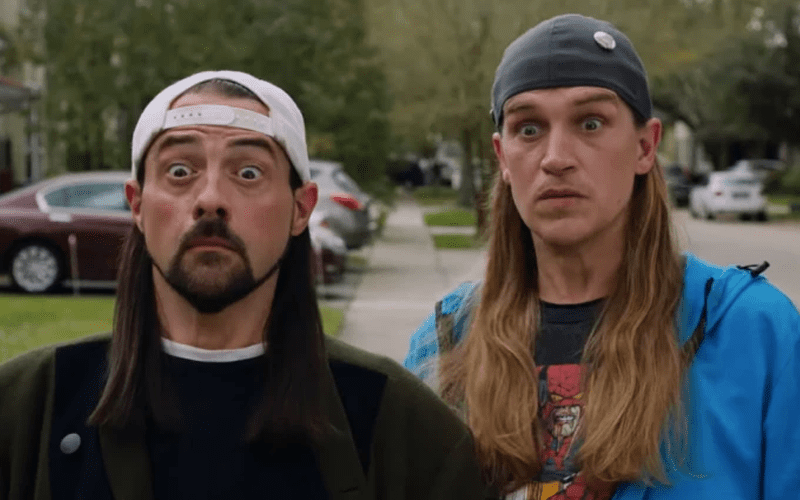 Jay And Silent Bob are back with a reboot and this included a stop by AEW: Dynamite’s debut episode on TNT to plug the film. After all, Chris Jericho is starring in the new film too.

Kevin Smith and Chris Jericho both appeared on The Rich Eisen Show where Kevin Smith admitted that due to their appearance on AEW: Dynamite, Jay and Silent Bob’s appearance on Friday Night SmackDown was cancelled.

Kevin Smith didn’t pull any punches when discussing the pro wrestling rivalry. He doesn’t have a dog in that fight because he just wanted to plug the Jay And Silent Bob Reboot.

“We were supposed to go do WWE, me and Jay, the very next day, which was Friday.”

“Was it Friday? SmackDown. And then the morning after, because we were on the AEW show, it trended, like, there was a lot of coverage and stuff. So the next morning we were told that WWE was like, ‘You can’t come on anymore,’ and they canceled us. They kicked me and Jay off the show, but not in a crazy way, they didn’t hit us with chairs.”

“The first casualty of the wrestling war was Jay and Silent Bob,” Chris Jericho replied in a joking manner.

It seems like WWE is taking things personally no matter if they like to admit things or not. It’s unclear how WWE thought this might change things if Jay And Silent Bob appeared on both pro wrestling shows, but it is still a very interesting concept.

Thanks to ComicBook for the quote