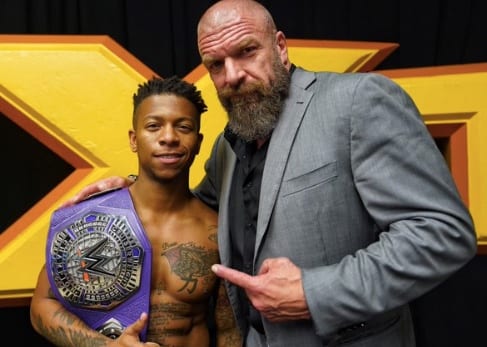 While the majority of fans are choosing to focus on the fact that the purple belt probably needs a bit of a facelift now that it’s being featured on NXT television, others are praising Rush for his ability to overcome what seemed to be a tricky situation for him backstage in WWE.

Now, not only do the fans have to learn to respect and appreciate the former independent star, but everyone behind the scenes needs to do so, too.

Triple H wasn’t shy when it came to letting the world know what he thought and how he felt in regards to Rush’s accomplishment, and as we look ahead to the future, it would appear as if Lio is going to continue to be a solidified member of the NXT roster.

Some WWE fans would probably enjoy seeing him return to his former role of being a great mouthpiece for Bobby Lashley, but at this moment in time, it appears as if WWE has their own plans for the former Bellator fighter.

Rush has the potential to do some truly great things within the ranks of WWE, and it’s just a case of building him up in the right way. After many backstage rumors and reports, all that matters now is that Lio takes the potential we all know he has and harnesses it.