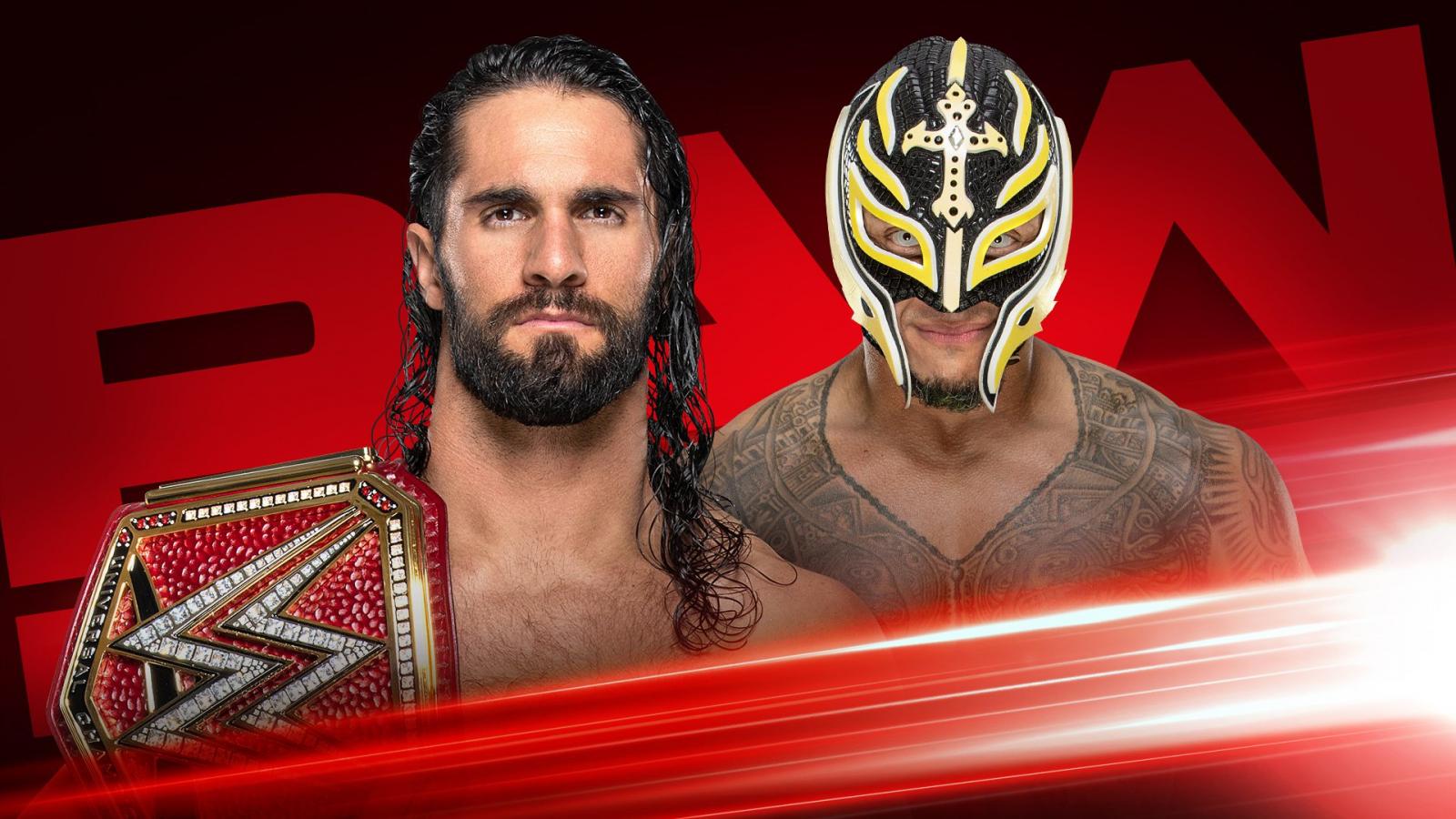 Tonight’s episode of Raw is the much-lauded season premiere. As such, WWE is going all-out and we have a stacked card on our hands. Not the least of which is the Universal Championship Match between Seth Rollins and Rey Mytsterio. The lucha legend won the opportunity to face Seth last week on Raw, and tonight he faces the Champion in his biggest match since 2011. Of course, Seth faces Bray Wyatt inside Hell In A Cell in a mere six days from now, so his sights could be set elsewhere.

Brock Lesnar returns to Raw tonight, less than a week away from facing Kofi Kingston in the SmackDown Live main event for the WWE Championship. Brock and Kofi are likely to go face-to-face one last time to drum-up anticipation, and that should be one hell of a match!

We’re getting a special episode of Miz TV tonight that features WWE Hall of Famers, Hulk Hogan and Ric Flair. We have no idea what this segment will consist of, but there’s no doubt that someone will interrupt and we’ll get a feel-good moment with the babyfaces.

Sasha Banks faces Alexa Bliss, Heavy Machinery get a Tag Team Titles shot against Dolph Ziggler and Robert Roode, and Cedric Alexander gets another go at AJ Styles for the United States Championship. So yeah, it’s a very stacked episode of Raw tonight. Be sure to follow us on Instagram and Twitter, and enjoy the show!

Rey comes to the ring and mentions that he’s facing Seth Rollins tonight, and points to his son Dominik in the front row, saying he’s doing it for him. He says he will be bringing the title home for him tonight but then he’s interrupted.

Heyman and Lesnar make their way to the ring, accompanied by pyro. They stand in the ring and the fans boo. As Heyman is about to introduce himself and Brock, Rey snatches the microphone out of his hand. Mysterio starts to speak Spanish but Brock just grabs him and hits an F5! Lesnar lifts Rey and hits another F5. Brock then looks over at Dominik in the front row and climbs out of the ring. Brock stares at Dominik, who takes a seat and looks terrified. Brock grabs Dominik and yanks him over the barricade. He looks to hit an F5 but he almost drops him, then just slams him into then ring post. Brock tosses Dominik around like a ragdoll, then puts him in the ring and hits a huge German suplex. Rey tries to attack Brock’s leg but gets hit with another F5!

Lesnar leaves the ring to thunderous boos. He stops halfway up the ramp and comes back into the ring. Brock lifts Rey and hits a massive release suplex, then hits one on Dominic. Brock leaves the ring and Heyman pleads with him to leave, while referees and officials check on Rey and Dominik. Again Brock gets in the ring and stomps some officials, tosses Rey from the ring, then throws Dominik out as well. Brock looks like he’s losing his mind and the fans chant “a$$hole”. Lesnar rips his shirt off and poses before leaving for real.

We return to commercials from Brock’s hellacious attack on Dominik and Rey Mysterio. During the break Dominik was put on a stretcher and wheeled out as Rey repeatedly apologised to him.

Sasha Banks makes her way to the ring, followed by her opponent, Alexa Bliss – who also now has pyro. Before the match gets underway, The Man, Becky Lynch comes out with some cool steam-blast pyro and sits with the commentary team.

The match gets underway and Sasha slams Bliss by the head. Bliss reverses Sasha and slams her into the turnbuckles. Banks tosses Sasha to the apron, then hits her with a forearm and Bliss falls to the floor. Banks gets on the top rope and talks trash at Becky Lynch, who in turns climbs on the announce table and gives it right back.

We return from a short break to see Alexa hit Sasha with an arm drag and she rolls from the ring. Bliss runs and slides under the ropes but Sasha tries to catch her in the apron like her tag partner. Bliss punches her away but Sasha delivers a kick and drops her.

Banks gets Alexa back in the ring and controls the pace. She takes Blissdown with a submission, but Alexa fights out and hits a headscissors that sends Banks into the turnbuckles. Bliss drops Banks and hits double knees to the stomach but misses the handspring follow-up and Sasha hits a meteora.

The whole time this match has been happening, Becky has stood on the announce table wrapping her hands in tape. Banks shoves Bliss into the ropes and begs for mercy, then kicks her knee out and rolls her up, holding the tights, and wins.

Her name is Becky, and she LOVES to fight.#RAW @BeckyLynchWWE pic.twitter.com/HqCjrfDjss

As soon as the match ends, Becky makes her way down to the ring and starts brawling with Banks. Sasha escapes the ring and into the crowd. Becky grabs the mic and says that Banks can run away tonight but not on Sunday. She says Banks made things personal, but she plans on making it painful, because the Irish in her means she can’t stop now.

Robert Roode and Dolph Ziggler make their way to the ring. They will face Heavy Machinery after the break.

Charly Caruso is backstage and she what happened with The Fiend last week on Raw. Charly starts to interview Seth Rollins, but he interrupts her and says he can’t think about anything else but what Brock did tonight. As for Hell In A Cell, he doesn’t know what he’s going to do. He says he’s going to survive, prevail, and walk out the Universal Champion. But tonight is the season premiere of Raw, and if Rey can wrestle, then he has his shot. Regardless, the fans are getting a Universal Championship match and he will burn it down.

The bell rings and we start with Dolph and Tucker. They lock-up and Ziggler forces Tucker to the corner. Ziggler takes a headlock, Tucker shoots him off, and hits a shoulder tackle.

Otis tags in and hits Dolph with a stalling suplex, then Roode comes in and they hit stereo stalling suplexes. Tucker and Otis run and squash Roode between them, then bump bellies and pose for the crowd.

Back live and Knight knocks Roode off of the apron, before hitting Dolph with a hip toss. Roode yanks the top rope down and Knight falls to the floor. Roode tags in and slams Knight into the apron, then tosses him into the barricade.

Back in the ring and Dolph tags in to hit a neckbreaker to Knight. Ziggler takes a headlock and grinds Knight into the mat. Tucker fights up but Ziggler kicks him and tags Roode, who hits a spinebuster for a two count. Knight slams Dolph into the top turnbuckle and tags are made to Roode and Otis.

Otis hits Dolph with a flapjack, then Roode chops him, but Otis no-sells it and dances before throwing Roode over his head. Ziggler runs in and Otis hits an airplane spin body slam. Otis runs at Roode in the corner but eats a kick. Roode jumps but gets caught and Otis tags Knight, who runs in to hit the Trash Compactor but Ziggler comes from nowhere with a Zig-Zag to Knight. Ziggler knocks Otis from the ring and Roode hits Knight with the Glorious DDT for the win!

We see Hulk Hogan, Jimmy Hart, and Ric Flair making their way to the ring as we head to the break.