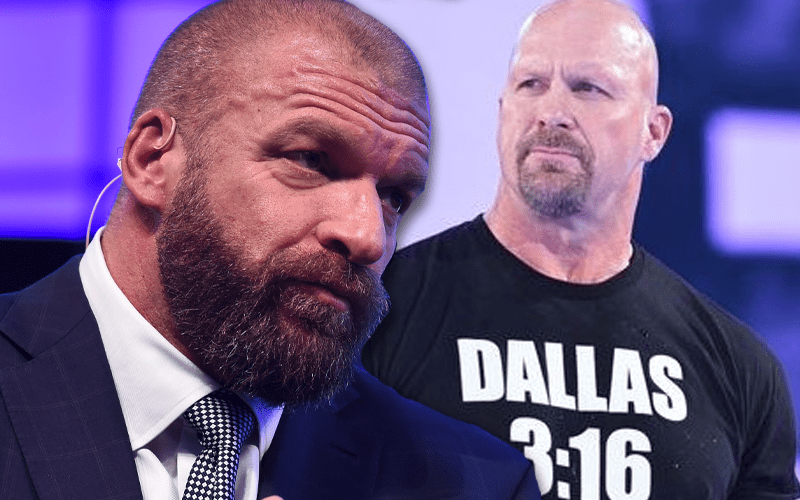 Triple H’s relationship with Lemmy from Motorhead is well-known. The famous metal band performed The Game’s WWE entrances which led to a relationship between Triple H and the legendary frontman.

Steve Austin recently told a story during his podcast about a gift he picked up for Triple H over a year before he had a chance to present it to him. He ran across a photographer’s image of Triple H with Motorhead. It was framed and Austin thought Triple H just had to have it.

“So I picked that picture up, Kristin and I picked it up and put it on the Jeep and it has been sitting in my house for over a year. I didn’t want to mail it. I didn’t want it to break. I didn’t want it to get crushed. When WWE was in town, I was out of town. I thought I was just going to take it to the Staples Center, but I never had a way to get it to Triple H. So finally, when I was going to go to [Madison Square Garden], I said, ‘this is my chance to take him this picture and hand it to him personally.’ So I took it to him and I said, ‘hey man, I found this about a year ago at this meeting and for some reason, I just knew that you had to have it.’ And he was just blown away by it. He absolutely loved it. You know, Triple H is a very reserved guy. I didn’t know what he was going to think. And it turns out, all these years later, at 2005, he introduced them at that concert that night! Yes [at The Wiltern], yes, [in Los Angeles, California], he was there announcing them on stage before they made their entrance! Yeah, so that picture was destined to end up in his hands!”

This photograph of the first night Triple H met Motorhead had to mean a lot to him. It was also pretty cool to hear Austin tell this story which provided us a look inside the friendship of these two pro wrestling legends.