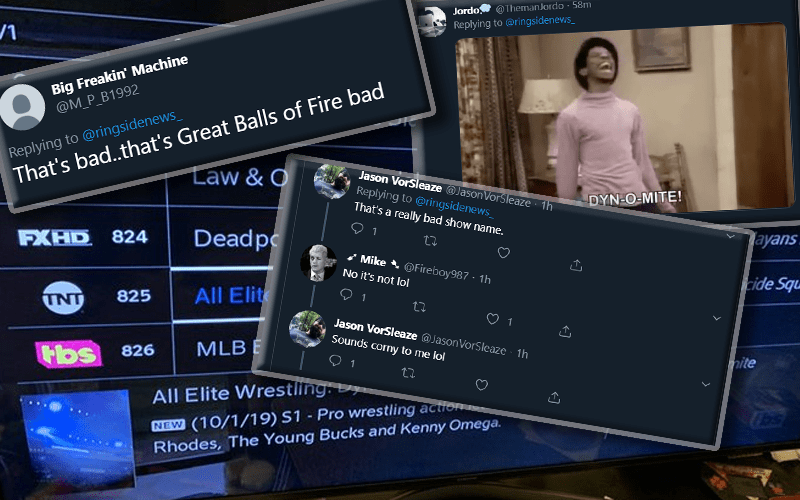 This name is punny being Dynamite on TNT, but how are fans reacting?

The company also registered “All Elite Wrestling: Revolution.” Some of our awesome readers contacted us to let them know that their cable guide did list that as the show’s name for a brief moment. Then it changed back.

So far the reactions has been mixed. We conducted a poll on the Ringside News’ Twitter account and about 55% of the fans aren’t fans of the new name as of this writing.

Keep in mind that this is a new name, but with the proper marketing it will probably grow on a majority of people.

After all, does anyone else remember how dumb every wrestling fan thought it was when WWE named Paul Wight “The Big Show” after he jumped from WCW as “The Giant?” People love the Big Show’s name so much now he is going to soon have “The Big Show Show” on Netflix.

All Elite Wrestling is getting their own show on TNT. It will start on October 2nd and provide a real alternative for fans and help broaden overall interest. That is a good thing. Honestly, we wouldn’t care if the name of their show is: “AEW: We Also Sell T-Shirts Wrestling Show.” At least they’d have this opportunity on a national level.

The point is that the name doesn’t make the show, but fans have already come up with some pretty opinionated initial responses. Others are defending AEW’s name.

You can check out some of the first responses below: