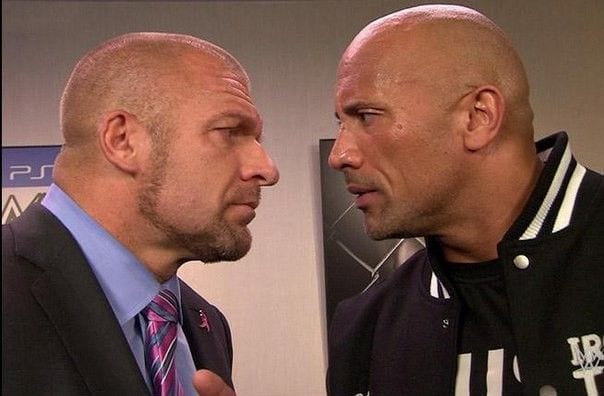 It’s always nice to see legends from years gone by taking a look back on their time in the business, especially when those legends are long-time rivals Triple H and The Rock.

The expectation, for a few years now, has always been that these two behemoths of the pro wrestling world would square off once again before they called it a career. While The Great One seems to be semi-retired, we wouldn’t be surprised to see him return in order to face off against either The Game or his cousin Roman Reigns.

In terms of their trip down memory lane, the moment they both took the time to discuss featured a pretty hilarious spot with a camera that went down in the midst of a strap match.

Realistically speaking these two probably won’t have an actual match with one another, but one or two segments here and there certainly wouldn’t be the worst thing in the world.

Fans constantly complain about seeing Triple H in the ring on the big stage, mainly because he seems to get the upper hand more often than not. Instead of complaining about it, though, accepting it may be the best way to go – especially when you consider the quality of opposition that he seems to square off against.

If the match did happen, then we just hope it doesn’t take place over in Saudi Arabia. This is the kind of blockbuster rematch that belongs on the grandest stage of them all, or else, we’re good.