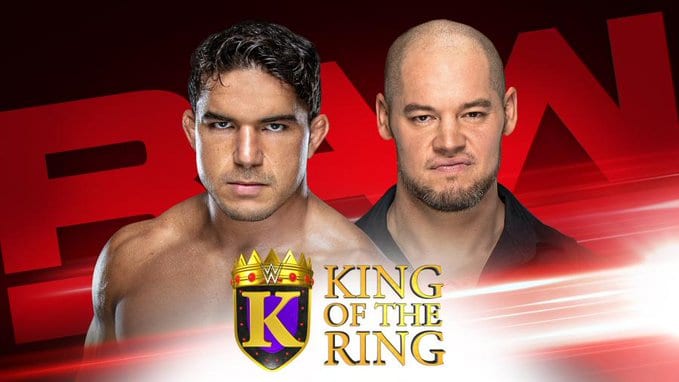 Tonight’s show is to be headlined by the King of the Ring final match between Baron Corbin and Chad Gable. Gable has been the underdog of the tournament and put on some great performances, while Corbin is the dastardly heel who cheated his way here. It’s been a great tournament and tonight it culminates!

Elsewhere tonight, we get the fallout from last night’s Clash of Champions PPV. Seth and Braun Strowman lost the Tag Team Championship’s to Bobby Roode and Dolph Ziggler, and then Seth retained over Braun in the main event. Of course, almost all of that was overshadowed by the ending of the show in which Bray Wyatt, The Fiend, attacked Rollins and left him lying on the stage. Bray will be challenging Seth for the Universal Championship at Hell In A Cell next month, so expect the mind games to truly begin tonight.

Elsewhere tonight, Becky Lynch must respond to the $10,000 fine she incurred for beating Sasha Banks after their no contest finish last night. The Street Profits are hosting a gender reveal party for Maria Kanellis’ baby. And Cedric Alexander seeks revenge on AJ Styles and The O.C. for the beatdown they put on him after the match last night.

And that’s the preview for tonight’s Raw. Let us know what you’re excited to see and be sure to follow along on the Ringside News app, or by following us on Instagram on Twitter. Enjoy the show!

Slayer of Beasts, Monsters, and… maybe, Fiends?@WWERollins is in the house! #RAW pic.twitter.com/hzOpAZiPDN

Rollins comes to the ring and says that Knoxville is loud tonight. He says they have a lot to unpack; last night he and Braun Strowman lost the WWE Tag Team Championships, but they didn’t have time to focus on that. Because they faced each other in the main event with the Universal Championship on the line. Seth says Braun is very big, very strong, and gave him the fight of his life. He says he had to give Braun four Stomps and a Pedigree in order to win. But he didn’t even have time to take-in his win because he was cloaked in darkness and taken out.

The crowd chants “yowie wowie”. Seth says yowie wowie indeed, because the last thing he saw was the face of The Fiend. And when the lights came up, surprise, surprise, Bray was nowhere to be found. But it doesn’t matter because in three weeks he faces Bray inside Hell In A Cell.

Bray Wyatt appears live on the Titantron for a Firefly Fun House. Bray welcome the fireflies to the show and says he can’t believe he’s seeing his future best friend, Seth Rollins. He says he’s glad that Rollins is OK, and Seth questions that and calls him a sick dude. Ramblin’ Rabbit appears and tells Seth to run, so Bray clobbers him. Bray says that name-calling isn’t nice, and he’s made mistakes but so has Seth. And you have to forgive but he never forgets. And that’s why The Fiend probably attacked Seth last night and who knows, maybe he’ll have more to say tonight? Bray then looks dead into the screen for a minute as the camera zooms in. We see The Fiend super-imposed over Bray, then he stares again before laughing and the segment ends.

We see the graphics for the King of the Ring final, as well as an upcoming match between the Women’s Tag Team Champions, Alexa Bliss and Nikki Cross, and Sasha Banks and Bayley. The graphics are upside down but it seems like they’re implying it’s the work of The Fiend.

Braun Strowman is shown walking backstage. Charly Caruso stops him and asks what his intentions are tonight. Braun says the next man who steps in the ring is going to get his hands.

Roode says that nobody could have predicted last night, yet here they are. He tells everyone to take a look at your new tag champs. Braun Strowman’s music interrupts, and The Monster stomps to the ring. The Revival leave the ring and attempt to fight him on the ramp but both men get floored. Strowman comes into the ring and drops Ziggler with a big boot. Roode and Dolph leave the ring, so Braun runs around the ring shoulder tackling Ziggler, Dash, Dawson, and tries to hit Roode but the Glorious one retreats up the ramp. Well that’s one way to bury all your Tag Team Champions.

We see Alexa Bliss and Nikki Cross drinking from mugs backstage. Bliss says Sasha trashes things they can’t hold onto, to which Cross says Banks thinks she’s still the Tag Champion, and Bayley agrees. Bliss says that is because Bayley is an idiot, and tonight they show them who the real Champions are.

The O.C. make their way to the ring for six man tag team action.

We see the entrances for Alexander and The Viking Raiders.

The O.C. Vs. Cedric Alexander & the viking raiders

Cedric Alexander starts against AJ Styles. Alexander kicks Styles hard and beats him around the ring. Erik tags in and continues the beatdown on Styles. AJ retreats and Karl Anderson is tagged in. Erik beats him down, then tags Ivar and scoop slams Anderson, then body slams Ivar onto him for a two count.

Ivar applies an arm bar to ground Anderson, but Karl gets out and drops the big man to a knee. Erik and Luke Gallows tag in and the Viking punches Gallows back and knees away at him. Gallows reverses a whip, but Erik slingshots over him. Gallows sidesteps Erik and throws him out of the ring. Styles attacks Erik at ringside and Anderson hits him with a running knee. The heels are in charge as we head to the break.

Back live and Karl Anderson has Erik in a headlock. The big man tries to fight out but Anderson kicks him, then knocks Alexander off the apron. Erik then flips Anderson over and knees him in the face. Ivar tags in and drops Anderson, clotheslines Gallows, and hits AJ with a running seated senton. Ivar does a handstand to avoid Anderson, then slams him for a pin but Gallows breaks it up.

We get a sequence in which everyone hits big moves on each other, resulting in AJ Styles getting a blind tag from Karl Anderson and hitting Cedric with a Phenomenal Forearm for the win!

As soon as the bell rings, AJ starts kicking Alexander. The Raiders come in to stop it but The O.C. come in and a brawl breaks out. The Raiders knock Anderson and Gallows from the ring, then Ivar hits a senton to them on the floor – he landed really hard on his back. Meanwhile AJ goes to the top rope but Cedric Alexander meets him there and punches AJ silly. Alexander looks to his Styles with a hurricanrana but gets hit with a Styles Clash from the middle rope!

We see a video from earlier today, when Carmella and R-Truth visited the University of Tennessee. They’re checking out the women’s basketball hall of fame, which has a huge basketball on top of the building. Truth is asking Carmella how heavy the ball must be and worries that it might fall on their head. Kane walks up, well technically Knox County Mayor, Glen Jacobs, and Truth has no idea who he is. Truth asks him how big the female basketball players were to dribble that huge ball. Kane asks him if he wants to go for a ride in a limo and Truth agrees, saying it isn’t every day you get to ride in a limo with the President! Carmella was covering her face several times during that, hiding laughter.

Yes, OF COURSE you know him.

Baron Corbin makes his entrance for the King of the Ring finale!

King of the Ring Final

The bell rings and the match gets underway. They lock-up and Corbin shrugs Gable off. Chad tries to shoot and grab the ankle but Corbin grabs the ropes to force the break. Gable takes a front facelock but Corbin climbs to his feet and delivers an elbow to Chad.

Corbin starts to control the match, stomping Gable and throwing him into the turnbuckles. Corbin drops Gable with a knee to the gut, then tells the crowd to shut up. Corbin runs and Gable pulls the rope down and he goes to the outside. Corbin slides right back in but Gable dropkicks him back out. Gable leaves the ring and runs at Corbin but gets hit with a back body drop into the timekeeper’s area!

We’re back live and Corbin has Gable in a rear chinlock. Gable fights to his feet and punches Corbin but then is whipped into the corner. Corbin hits the out-and-in clothesline for a two-count. Gable gets cracked with a big forearm to the back of the head.

Chad starts to rally and has Corbin literally on the ropes, but the lone wolf fires back with a huge boot and talks trash to Gable. Corbin lifts Gable and whips him chest-first into the top turnbuckle. Corbin hits Gable with several elbows, then sets him on the top rope. Gable counters a punch with an armbar over the ropes, but Corbin quickly lifts him high and slams him for a near-fall.

Corbin applies a modified rear chinlock. Gable tries to rally but gets dropped with a forearm. Gable rolls past Corbin and picks the ankle on the way. He gets the ankle lock in but Corbin pulls his hair and gets him off. Corbin runs at Gable in the corner but nobody’s home and he hits the ring post. Gable heads up top as the fans chant his name, and he connects with a missile dropkick.

Gable pulls himself up using the ropes and hits a running front flip kick, then another, and another. He looks for a fourth but gets hit with a pop-up powerslam. Corbin leaves the ring and drags Gable out with him. He slams Gable into the barricade and taunts the crowd, then does it two more times. Corbin looks to tackle Gable against the steps but Chad moves and he crashes.

Corbin just makes it back into the ring at 8 but Gable grabs him and slams his ankle against the ring post repeatedly. Gable then dropkicks the leg of Corbin, before delivering repeated forearms. He hits the ropes but gets caught with Deep Six for a near-fall! Corbin attempts the out-and-in clothesline again but this time Gable hits him with a backwards roll into a German suplex for a near-fall!

Gable heads to the top rope and looks for a moonsault but nobody’s home. Corbin grabs him for the End of Days but Gable lands on his feet and gets him in the ankle lock! Corbin screams and crawls for the bottom rope. He almost gets there but Gable drags him back and locks it in with the legs wrapped around. Corbin screams and starts crawling again…and gets to the rope. Gable can’t believe it.

He grabs Corbin again and forearms him in the corner several times until Corbin shoves him off. Gable runs but Corbin catches him with a tilt-a-whirl End of Days and gets the pinfall!

Winner and King of the Ring: Baron Corbin

We see replays as Baron Corbin climbs to his feet. Chad Gable sits on his knees and laments his loss. The referee helps Corbin to the top of the stage, where he looks at the throne, crown, robe, and sceptre but then the camera cuts away and we don’t get to see him put it on.

The Street Profits are backstage and they’re partying with others for the gender reveal. It’s coming up next!