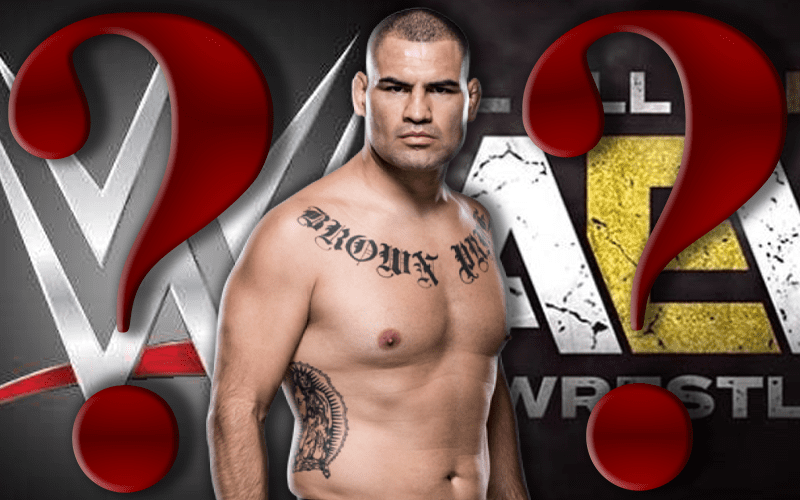 Cain Velasquez’s time in the squared circle might have been brief at this point, but he really seemed to impress in his only outing at TripleMania.

Velasquez’s deal with AAA is only for three matches. His next two will be in New York City and Los Angeles, but after that he might be looking elsewhere.

We previously reported that both AEW and WWE are interested in having Cain Velasquez come in. This could result in a real bidding war.

ESPN recently asked Velasquez about which pro wrestling company he would lean toward between AEW and WWE. His response was quite surprising.

The former UFC fighter is looking much more favorably at All Elite Wrestling right now. He also admitted right off the bat that he loves them both.

“I love them both. I think obviously WWE is the powerhouse. They’ve had the biggest stars come from there and it’s the most watched wrestling in the U.S. for sure. I love the backstories and the drama, but their wrestling to me — I like more of the lucha stuff. I like the athleticism, and we do see some in WWE, but as far as wrestling goes, it’s not my favorite organization just as far as the wrestling.

“I think AEW is doing some great stuff. I like the talent that they’ve brought in. They have a mix of lucha, which I think is pretty cool, and something fans are really liking these days. They’re doing a great job in giving the fans what they want as far as the wrestling and I love that they’re doing that. I like them both for what they are, but I love the way AEW is going, the path they are going. I see big things for them in the future. … If I can, I’d love to do something with them.”

Cain and Cody had a lot of chemistry at TripleMania. That might play into this a little bit as well. Perhaps if Triple H got in the ring with Velasquez it might help the bargaining a little bit. At this point in his career, Cain Velasquez can do whatever he wants.