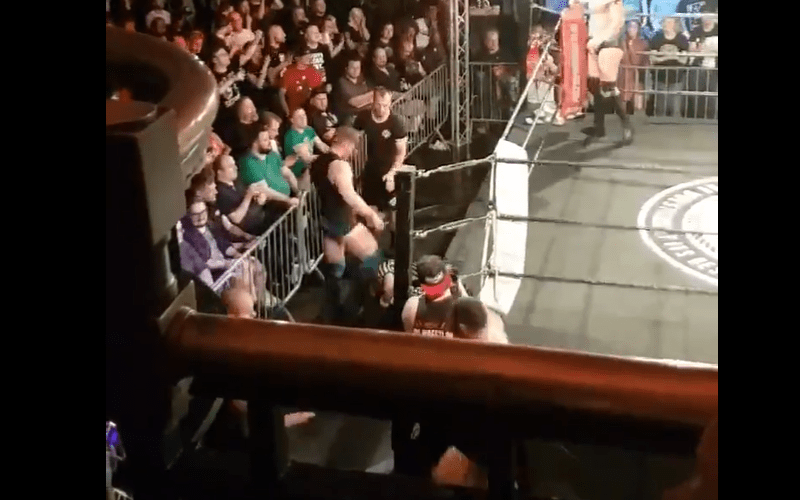 Pro wrestling is all about trust and it’s always unfortunate when something happens to injure someone.

We previously reported that footage was released of a referee getting a terrible beat-down at a RevPro show. The referee cannot officiate football games now which was his primary income and he might never return to the ring.

Sha Samuels, the man responsible for this beat-down has now put his side of the story out there. He didn’t realize at the time that there was anything wrong, but he does regret the situation happened.

Samuels also said that he has contacted referee Aaren Wilde about the situation where he apologized. He also wishes that Wilde would have contacted him personally first.

I’m going to address this once, and that’s it. A mistake happened during our match last week. As a performer, thinking on my feet, I scoop slammed the referee (as safely as possible) and cut a promo saying it was a “stitch up”

I got kicked in the face to the pleasure of the audience for my trouble and hoped the mistake was forgotten about. At the time I was only concerned about the integrity of the match. We spoke afterwards, and all seemed well.

I can only apologise for what happened

I genuinely believed I had done nothing wrong, but have now had my eyes opened and educated to the fact that regardless how safe you are, you should never assume it is ok to get physical with a non-wrestling member of the crew on the fly. I guess I have been too comfortable with

I would never endanger anyone in a professional environment, no matter what the issue.

My peers know how safe and professional I am and can only apologise again to anyone who has been affected.

We hate this entire situation because it’s always unfortunate when something like this happens. It not only puts a blemish on the business, but it also legitimately injuries people which is never a good thing.

The only thing we can hope is that everyone did learn a lesson here. You can check out the tweets that Samuels sent below including one video showing the bodyslam he gave the referee. It might not have been agreed upon, but he did protect him when giving the move.