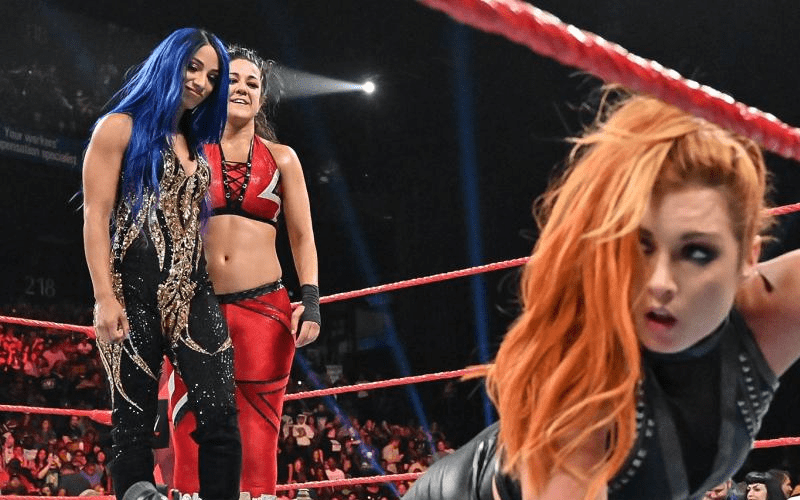 Bayley turned heel on RAW this week and everyone was very excited to see this happen. Now Sasha Banks and Bayley are on the same side once again, only they’re on different brands.

Dave Meltzer discussed WWE’s current situation during Wrestling Observer Radio. The idea for this heel turn was to get heat on Bayley, but WWE had to have known this heel turn would get a pop.

Fans attend live television tapings because they want to see something notable take place. If there is a happening like a heel turn they’re going to cheer no matter what, because they are happy to witness this event.

The only issue is whether this heel turn for Bayley could end up getting heat on the people she turned against.

“They knew [the crowd would cheer]. People will always cheer a happening. Look, this is a Paul Heyman show. I haven’t been told, but I can guarantee that he knew, I completely guarantee. It is what it is and that’s just if you’re gonna do a turn they’re gonna cheer you. I just hope they don’t end up booing Becky Lynch because that’s not the goal, but you know that’s one of the things that turned Ronda Rousey with Charlotte Flair beating her up when it was supposed to be the big Charlotte Flair heel turn.”

We will have to see how things turn out for Bayley as the storyline progresses. Since she is on SmackDown Live, we’re likely to get some kind of explanation tonight on the blue brand’s show. Let’s just hope that Bayley turning heel didn’t kill any momentum that WWE had going on for Becky Lynch.