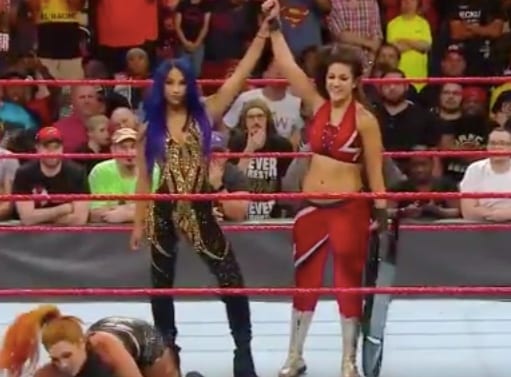 Last night Bayley finally turned to the dark side after months of fans calling for her to test the water as a heel instead of continuing on as a babyface. The SmackDown Women’s Champion struck a steel chair across the back of Becky Lynch, and just like that, she had aligned herself with best friend Sasha Banks once again.

Judging by the reaction of the fans in attendance, we’d say they hit something of a home run. Banks and Bayley quite clearly work incredibly well together, and while their long term success is certainly not guaranteed, they’re off to a solid start.

After RAW had gone off the air last night the cameras kept rolling, capturing the celebrations of both women as they continued to stand tall over the prone body of Becky Lynch.

It certainly seems like we’re quite some distance away from the Four Horsewomen being a united front once again, but even with that being the case, we still feel like they could be holding all the gold before too long.

All we’d need is for Charlotte to beat Bayley for the SmackDown Women’s Championship, Becky to retain against Sasha, and Bayley/Sasha to eventually regain their Women’s Tag Team Titles.

It seems like a bit of a stretch but it certainly isn’t implausible, and by the time WrestleMania 36 rolls around next year, we think there’s a good chance we could finally see that 4-on-4 Horsewomen showdown that we’ve all been waiting for.

We can dream, right?