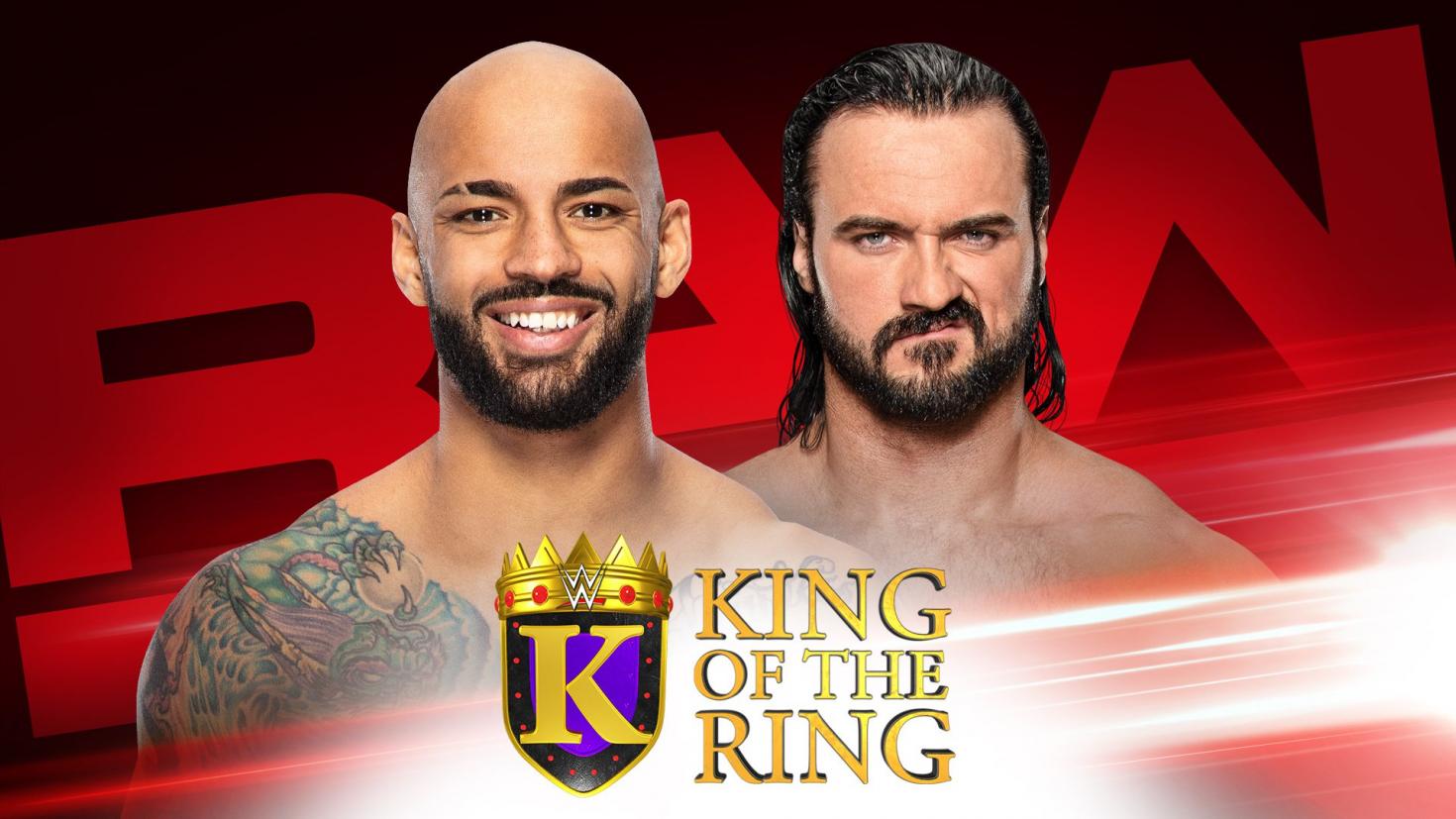 Tonight’s show will feature the continuation of the King of the Ring tournament, as Drew McIntyre faces Ricochet, and Baron Corbin faces The Miz in Round 1. Last week we saw Samoa Joe, Elias, Cedric Alexander, and Andrade progressed to Round 2. Who will join them? Find out tonight.

Sasha Banks will have her first in-ring match tonight since WrestleMania, and she will have it against Natalya. Banks returned two weeks ago and laid a serious beating to Natalya, before turning her attention to The Man. Tonight Natalya aims for retribution, but don’t be shocked if Becky shows her head.

And then there’s the new Raw Tag Team Champions: Braun Strowman and Seth Rollins. The unlikely duo bring their new titles to New Orleans but the questions remains; can they co-exist? Highly doubtful.

And that’s the preview for tonight’s Raw. Let us know what you’re thinking by following us on Twitter and Instagram, as well as downloading the Ringside News app. Enjoy the show!

WWE Raw from New Orleans opens with The Boss, Sasha Banks, coming to the ring.

It’s Monday night. It’s 8 PM ET. And that means…IT’S BOSS TIME!@SashaBanksWWE is LIVE on @USA_Network to kick off #RAW. pic.twitter.com/TI0b9Qh7VG

After a replay of her return and he subsequent attack on Natalya, Banks says “so everybody wants to know why?”. She reiterates the question, and says that, for four months, she’s been gone, out of sight, minding her own business, and not talking to anyone. And yet all she’s heard is people saying her name. A light “Becky” chant picks up.

She says she heard that she was throwing a fit, and lying on the locker room floor crying, and that she took her ball and went home. “You’re damn right I did.” She says she was relegated to a WrestleMania pre-show tag team match, in a match she didn’t give a damn about. Meanwhile Becky Lycnh was main eventing the whole show against Ronda Rousey. So yes, she took four months off and took some vacations using her WrestleMania paycheque.

Now she’s back though, and she had a plan. She reminds us that she hugged Natalya and she lied to Nattie by saying, “your daddy would be so proud of you.” Then came Becky Lynch to the rescue but we saw what happened to her. And now she is the centre of attention, just like she deserves. Because she has been the centrepiece of the women’s division since day one and she deserves all this attention.

Natalya comes running down and Banks meets her on the ramp. They brawl on the outside, back and forth, with Nattie slamming Banks into the steps. Officials come down and separate them but they continue breaking free and brawling. We head to the break as they’re pulled apart again.

We return to see the Street Profits backstage. They get excited about tonight’s Raw and mention that there will be a Tag Team Turmoil Match, which is essentially a gauntlet match. That match includes The Revival, Lucha House Party, Heavy Machinery, Ryder & Hawkins, The B-Team, The Viking Raiders, Gallows & Anderson, and Ziggler & Robert Roode. The winners will go on to face Rollins and Strowman at Clash of Champions.

Ricochet makes his entrance for another match in Round 1 of King of the Ring. Drew McIntyre is out second and he stops to hold the sceptre and sit on the throne. The winner of this match will face Samoa Joe next week.

The match gets underway and Ricochet looks to grab McIntyre but gets tossed off. Drew throws him into the turnbuckles, then chops Ricochet down as the high-flyer did some handstands. Drew hits Ricochet with a huge biel, then delivers another chop to the chest.

Ricochet throws Drew to the outside, then hits a springboard moonsault from the ringpost but McIntyre dodged it. Ricochet looked for a headscissors but Drew held him up, then hit a backbreaker into the barricade. Still holding Ricochet, McIntyre climbed the steps and hit another backbreaker, onto the apron this time.

Ricochet connects with a twisting tope to Drew on the outside. Both men get back inside and Ricochet looks for an inverted hurricanrana but Drew stands firm and hits an inverted Alabama Slam for a two count. McIntyre lifts Ricochet and slaps him in the face. Drew lifts Ricochet in a military press but Ricochet escapes.

McIntyre runs for a splash in the corner but Ricochet catches him in mid-air and hits a fisherman suplex. Ricochet looks for another suplex but Drew does one of his own and throws him off. Ricochet hits a springboard clothesline from the apron, followed by a standing shooting star press for a two count.

Back inside the ring, Drew looks for the Claymore Kick but Ricochet lands a superkick, then kicks him down but Drew comes back with a clothesline. Drew lifts Ricochet off the mat and hits a sit-out powerbomb for a near-fall. McIntyre lifts Ricochet onto his shoulders and climbs the ropes but Ricochet drops down and pulls Drew off. McIntyre literally throws Ricochet onto the top rope but the one and only jumps off and hits the Recoil! Ricochet goes back up top and lands the 630 for the win!

Ricochet progresses to the second round of the King of the Ring tournament, where he will face Samoa Joe. Still to come tonight, The Miz faces Baron Corbin in Round 1 of the tournament.

We see a replay of last week when Braun Strowman and Seth Rollins won the Raw Tag Team Championships.

Rollins and Strowman are interviewed backstage and she says that both of Seth’s titles will be on the line at Clash of Champions. He says whoever steps up to face him and Braun, they’ll be ready. Of course, Braun can’t take his eyes off the Universal Championship like a moron. Eventually Strowman says Seth is right, they’ll face anyone, but he wants to know who will face Seth at Clash of Champions. Rollins says there’s a long line of Superstars but then asks Braun if he wants a shot. Strowman laughs it off and says they’re partners, but then immediately says yes. Seth says it won’t be easy and he won’t like it but he never backs down. They shake hands and walk off. A literal second later Michael Cole says it has been made official, and we see a graphic for the match. This will mark the first time ever that the Tag Team Champions will then face each other for the Universal Championship in the same night.

The Miz gets on the microphone and says he’s accomplished a lot in his career, and he proceeds to rhyme off those accolades. He says people asks him what is left, but it’s simple: he wants everything. He says we’re all on the quest with him to steps on the iron throne, and he will become King Awesome.

The Miz Vs. Baron Corbin

The match begins and Corbin attacks Miz before he can take his shirt off. Corbin talks to the crowd, which allows Miz to start attacking him again. Miz kicks Corbin several times, then clotheslines him to the outside.

Corbin hits Miz with a right hand on the outside, before slamming him into the barricade. Back inside the ring, Corbin whips Miz into the corner, then hits the out-and-in clothesline. Corbin in control as we head to the break.