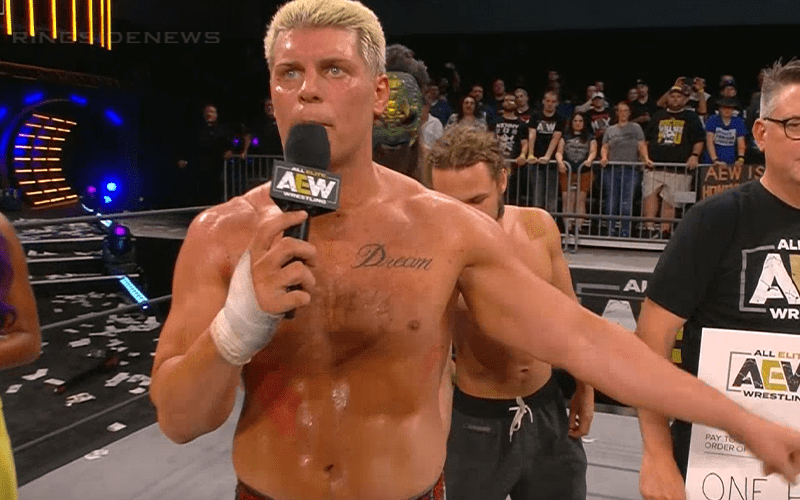 All Elite Wrestling’s October 2nd debut on TNT has already drummed up plenty of excitement. There are two matches announced for their TNT debut and tickets go on sale this Friday. It will be very interesting to see how well they sell on a Wednesday night show because it could be an indication of the weeks to follow as AEW continues their live television show.

AEW is starting a revolution and it will be televised. Cody Rhodes recently spoke to Busted Open Radio where he expressed that AEW’s focus will not be to bring in the “casual fan.” Instead, their mission is to keep those hardcore fans and focus on what they want to see.

“You guys have heard the term as you talk about wrestling — you guys have heard the term ‘casual fan.’ Right? ‘How are they gonna get the casual fan?’ The term casual fan, honestly I think I throw up in my mouth a little bit every time I hear it. Because it’s this vernacular to describe wrestling like it’s based on the Monday Night Wars. When the Monday Night Wars are over as in they’re not a thing as in their not happening now in the present. What’s happening here in the present is we can’t determine what it is.”

“It’s something that history will only be able to tell us. So my focus is always the base that built AEW. That base, if you’ve seen it, you get it. If you haven’t seen it then it’s something that you have to see and feel and Bully [Ray] knows what I’m talking about because there’s a lot of confidence that sometimes can get misplaced for arrogance from my behalf, from The Elite’s behalf.”

“I’ve seen the power [of the AEW base], I’ve seen it and that’s why I wanna focus on them first and foremost. There are people who are critical of what AEW does and instead of signal boosting that, I’d rather the 100s of the fans that we have in that base than that one salty son of a bitch that’s not coming on board anyways if that makes any sense.”

“You know the first way to fail is to try and please everybody, but I gotta take care of the people that brought us to the dance in the first place and I think that’ll be appealing on a global level, I genuinely do.”

All Elite Wrestling won’t have an easy road to travel from this point on because you have to know WWE is going to try and squash any momentum they are able to build. However, Cody Rhodes seems confident that they are on the right track to not only maintaining their core fan base, but also add to those numbers in a big way as time goes on.