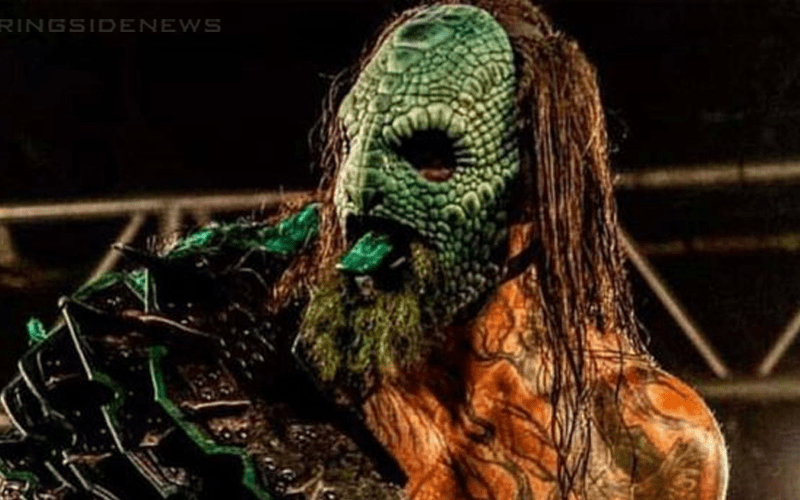 Luchasaurus could very well become one of All Elite Wrestling’s most popular acts. Along with Jungle Boy and now Marko Stunt, the three make a pretty mismatched trio, but they are still incredibly entertaining.

While Luchasaurus was in WWE’s developmental system, he had some serious issues. These issues weren’t just with the coaching staff either because he was fighting through the pain in a big way.

AEW’s resident dinosaur recently spoke to Wrestling Epicenter’s Interactive Wrestling Radio where he revealed that while in WWE’s developmental program, he was told that he might need to consider retiring. He had a hip issue that didn’t seem to be getting any better with time after he worked for so long on it. However, that’s obviously not what he did.

“Most of the time I was in (WWE) developmental, I was struggling with some pretty severe hip pain. You don’t want to say anything because you would risk losing your spot because there is so much competition down there. So, towards the end, I had a falling out with the coaches and I was ready to leave anyway. I got it checked out. It turned out I had a torn hip labral but also I had torn my abdominal muscles on both sides. So, they had to reconstruct that area, shave down my femur, fix the whole socket. There was a lot of arthritis in there.”

“After a year, there was still a lot of pain. I was still training. But, I wasn’t wrestling. The doctors said, “You might want to consider retiring because you might have arthritis the rest of your life and you may have to have a hip replacement.” At that point, I had the opportunity to do the reality show and get out of my (WWE) contract. I did that. After that was over, I started to go back and did my own research. After I finished all that, I went back and started to rehab my hip with my own research. I was able to fully fix my hip. The hip is totally medically cleared. There is no problem. Right now, I’m probably more healthy than I was in WWE Developmental 8 years ago which is crazy.”

Luchasaurus’ story is a prime example of ignoring doctor’s orders only to have it work out in your favor. It’s a very good thing for him that he didn’t retire when it was suggested because at 34 years old, he is reaching a brand new height in his pro wrestling journey with AEW that he wouldn’t have been able to see otherwise.