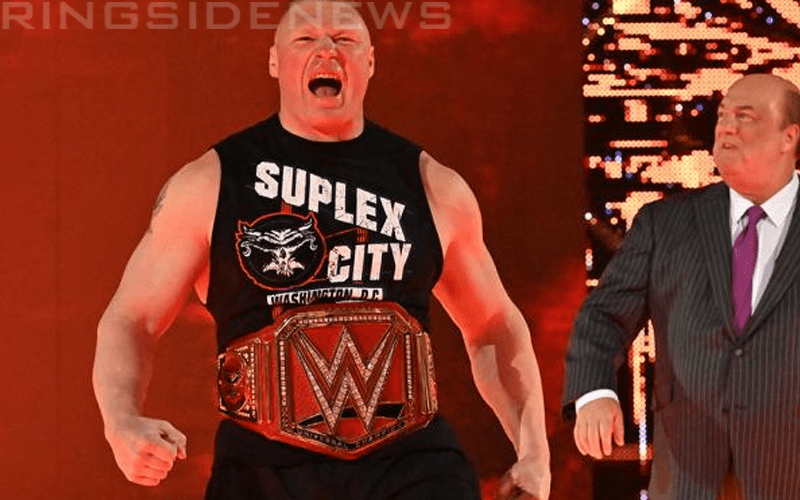 The headlining event at 2019’s SummerSlam (Aug. 11, Toronto, Ont.) will be another Universal Title match between current champion Brock Lesnar and the man who just lost the belt at Extreme Rules, Seth Rollins.

To briefly recap how we got to this point: Lesnar enjoyed the longest WWE championship run in over 30 years (503 days) before losing his title to Roman Reigns at SummerSlam in 2018. Reigns’ reign was, of course, short-lived due to a leukemia diagnosis.

Reign’s health issues seemed to put the WWE creative team into a state of chaos; the man groomed as the next face of the promotion was now out of commission indefinitely.

In their hour of desperation, they turned back to the most recognizable face still on the roster, Lesnar, even though he was a part-time performer.

Lesnar would go on to retake the vacant Universal title in a match against Braun Strowman, successfully defend it against Daniel Bryan and Finn Balor, and then lose it to Rollins at WrestleMania 35 in April thanks to a shot below the belt.

What seemed like it would be a decently long title run for Rollins came to a stunningly short end at Extreme Rules last week when The Beast Incarnate used the title shot he earned at Money in the Bank to book and win a rematch with Rollins.

Lesnar is now starting his third Universal Championship reign and, in reality, he has the WWE in a bit of a bind. The aging, part-timer is a bigger ticket than almost anyone else currently on the WWE roster. It seems that Vince McMahon needs Brock a lot more than Brock needs the WWE.

That’s why the current odds to win the Lesnar vs. Rollins match at SummerSlam pretty heavily favor the champion, according to Graham Mirmina of Sportsbettingdime.com.

Mirmina correctly notes that, “Rollins wasn’t lighting the world on fire during his time on top as Universal champion,” and asks “what would be the point of Lesnar beating Rollins for the championship only to lose it back to him the very next month?”

In all likelihood, the WWE is probably shifting away from Rollins as a legitimate title threat and building Lesnar back into a strong champion.

Over the last 18 or so months, Lesnar has been a part-timer, in part, because he was attempting to restart his UFC career. But the 41-year-old re-retired from mixed-martial arts in June and should now be able to appear at more WWE events. His attention ought to be less divided than it has been in recent history.

For all the WWE superstars hoping to oust the Beast from the apex of professional wrestling, that’s bad news. Even when he was multitasking, the WWE rarely hesitated to make him the man-to-beat, and rarely allowed anyone to beat him.