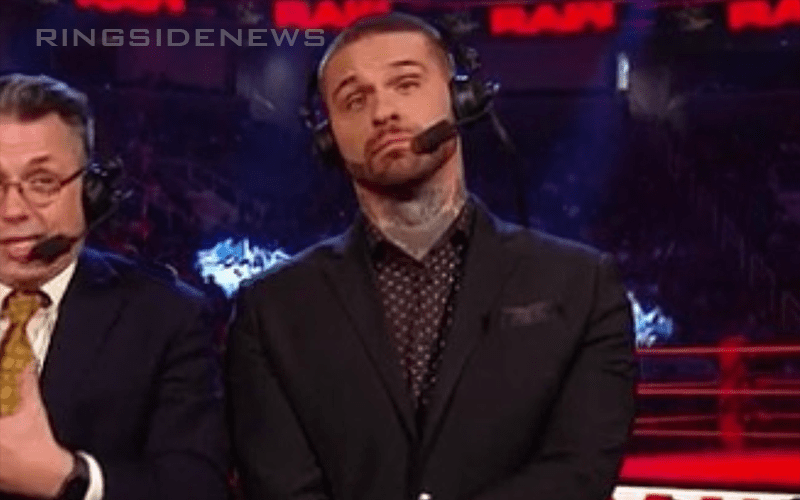 Corey Graves shocked a lot of people when he yelled “Holy sh*t” on RAW a few weeks ago. Since then he hasn’t dropped any of George Carlin’s 7 Dirty Words on television, but in reality there are way more than 7 dirty words in WWE because they can’t say Young Bucks either.

The biggest question in fans’ minds after Grave’s big S-Bomb was when we’ll hear him say something else in the same category of profanity.

While speaking to the Two Man Power Trip, The Savior Of Misbehavior said that he would love to introduce more profanity into his commentary. Let’s see if he gets his wish, but Corey seems like he would have no problem whatsoever pushing the envelope in that regard.

“Well, I mean hopefully [there will be more profanity] because I use more four letter words in any given day than most people walking the earth. You know three to six hours on the WWE Network and not get caught swearing. I think everyone’s getting pretty excited. I think there are some well-publicized changes within the company and honestly I don’t know much more than anyone who reads the internet knows. I think I get the news about the same time that everybody else does, there’s a shocker for ya — everyone things I’m in on [it.]”

WWE is going through some changes and although it might not happen overnight there are bound to be things what we see which make us take notice.

Hopefully, it is for the better because WWE needs to represent pro wrestling to the best of their ability given their global influence. The important thing to take away from this is that they are trying.