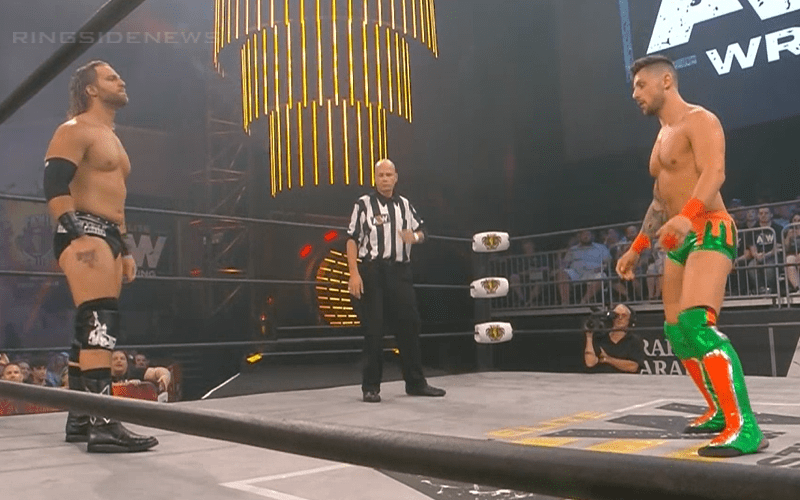 AEW All Out will feature Adam “Hangman” Page taking on Chris Jericho where the winner will be the first-ever All Elite World Champion. Y2J looked like an absolute star at Fight For The Fallen as he did a run-in on Page and then he got to cut his first promo in twenty years without a script. However, it took Hangman nearly twenty minutes to win his match.

Dave Meltzer explained on Wrestling Observer Radio why Hangman took so long to beat Kip Sabian. It’s not like Sabian is a scrub, because he’s extremely good and proved that at Fight For The Fallen and by defeating Sammy Guevara during his first match inside an AEW ring.

The reason the two took so long getting to their finish was simply because the AEW booking committee wanted to tease the fans that they could do another Broadway by running out the clock.

“They had a reason for it because they did a time limit draw on the last show and they wanted to tease that they could do a draw.”

Bryan Alvarez remarked that “this is not the match” to do that with and Meltzer agreed. The argument was that since Hangman is the #1 contender for the All Elite World Title (along with Chris Jericho) that it shouldn’t take Page nineteen minutes and ten seconds to beat Kip Sabian.

They told a good story and worked Hangman’s knee which will eventually play into when Chris Jericho targets it at All Out to soften him up for the Walls Of Jericho. This match was also a great way to protect Kip Sabian.

It didn’t help that the crowd was so hyped up from the previous match and the two decided to start their match slow and build to the time limit tease at the end. At least it was a good match although it might not have done Hangman many favors.