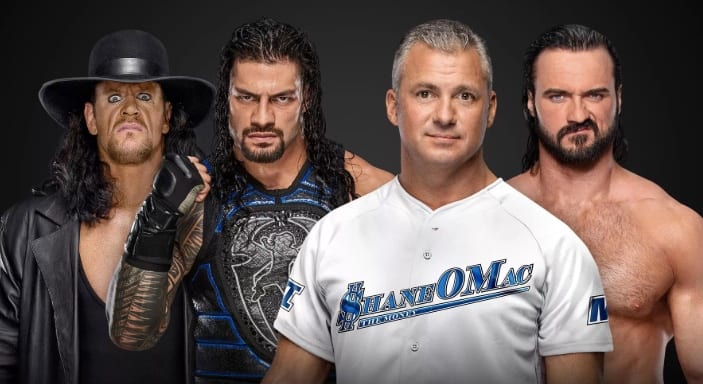 As seen on Sky Bet, the betting odds for the Roman Reigns & The Undertaker vs Shane McMahon & Drew McIntyre grudge match at WWE Extreme Rules have been released.

To say that this is an intriguing match would probably be an understatement, but one of the biggest question marks that fans have heading into it is this: where are WWE going with this Shane McMahon storyline?

Given that Roman and Taker are two of the most successful superstars in WWE history you would think a win would be guaranteed for them, but with the run that Shane has been on, you just never know.

Alas, Reigns and The Phenom are in fact the favourites to win this match with odds of 1/4. McIntyre and Shane are the underdogs at 5/2, which is actually pretty close – all things considered, that is.

The hope is that we get some legitimately entertaining stuff out of this encounter, as opposed to the standard work that we tend to see on house shows from this kind of a novelty match-up. These are four incredibly big names, and we’re intrigued to see what kind of match they’re going to piece together.

One thing is for sure: Taker is going to give it his all, especially after what happened at Super Showdown. He won’t want the match against Goldberg to be the last memory that fans have of him, and as such, we can expect a vintage performance from the man that made so many of us fall in love with pro wrestling.