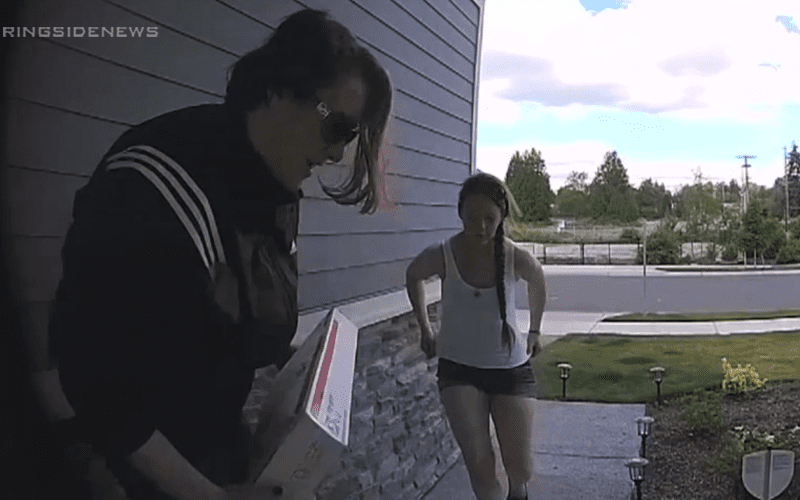 WWE means a lot to so many people around the world and can provide a lot of comfort for those in need. This is the case for one young man, but in an instant, his prized wrestling possessions were stolen away.

KIRO 7 reports that thieves were caught on camera stealing a 5-year-old boy’s custom WWE Title belts. This child, named Timmy Vick, is sick and needs surgery to remove a brain tumor and he is also autistic.

One of those boxes that was stolen contained replica WWE Championship Titles. It was described that these thieves “stole hope” from the little boy as he sleeps with his titles at night.

Custom belt maker Sergio Moriera offered to make this sick child custom belts free of charge. While he was at the WWE Raw event in Everett, his doorbell camera went off and he watched two women walk up and steal the young boy’s titles that he had just received from Delaware.

After the Tacoma news channel aired a segment showing the two women stealing this boy’s titles from off Moriera’s porch, the titles were returned yesterday morning.

They left the titles on his porch and also included a short apology letter:

“We are so sorry for taking your stuff. Never in a million years would I have expected I would have stolen from a sick five year old… I am ashamed of what I did.”

It’s great that these women had a change of heart, but to steal from anyone is not okay — no matter who it is. Their “apology” letter had some major lapses in morality because it implied that they’d be okay with stealing from someone else. It should be noted that two women were involved in this theft and they had a getaway driver as well. So it also makes you wonder if Sergio was the only home they hit that day.

Sergio Moriera said he wouldn’t press charges if those belts reappeared — which they did. Local police are still wanting to talk to these women so they can really do the right thing and turn themselves in to authorities.