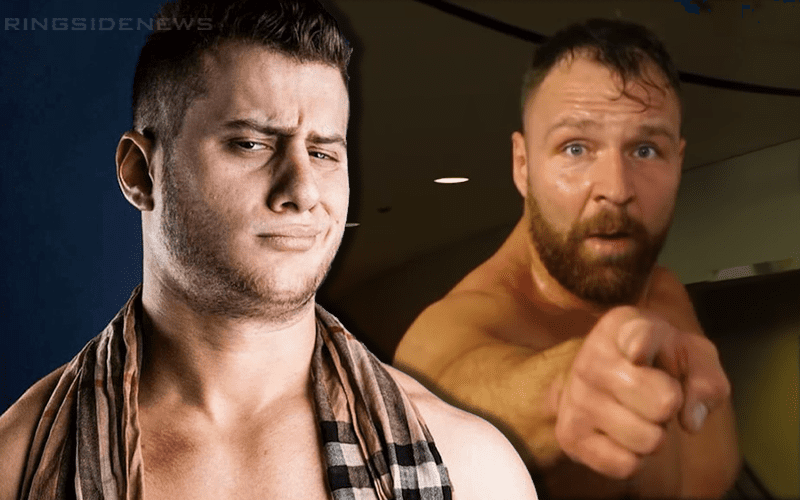 MJF appeared on Busted Open Radio today and he had a lot to say. After he explained why he’s happy that people hate him and what he would do if someone handed him a script, MJF had another target: Jon Moxley.

One caller who works as a women’s shoe salesman immediately started getting grief from MJF as he called him out for having a foot fetish. Then the caller asked Maxwell Jacob Friedman what he thinks about Jon Moxley’s emergence in AEW. Needless to say, Friedman had a response.

The Salt Of The Earth obviously understands the kind of drawing power Jon Moxley has. It also seems like MJF would be more than happy to tangle with the former Shield member down the road for “an easy payday.”

“Because of Jon Moxley and what he did at Double Or Nothing it brought even more eyes if you can believe that — cause I’m on the show — to Double Or Nothing. So I respect him for that matter.”

“Do I think that I could beat him down to a bloody pulp in the middle of the ring hands-down easy and get my hand raised and make an easy payday? Yeah, I do, foot fetish guy.”

MJF might think that Moxley wouldn’t give him that hard of a time, but Mox would probably disagree. There could be plenty of time for us to see Friedman and Moxley wrestle multiple times in AEW, but it will all depend on how they book things.

If MJF keeps up his reputation and his mouth then there will likely always be fans more than ready to see him take some punishment, especially from Jon Moxley. When everything’s said and done the AEW ring might be covered in blood, but the real question is who it belongs to.