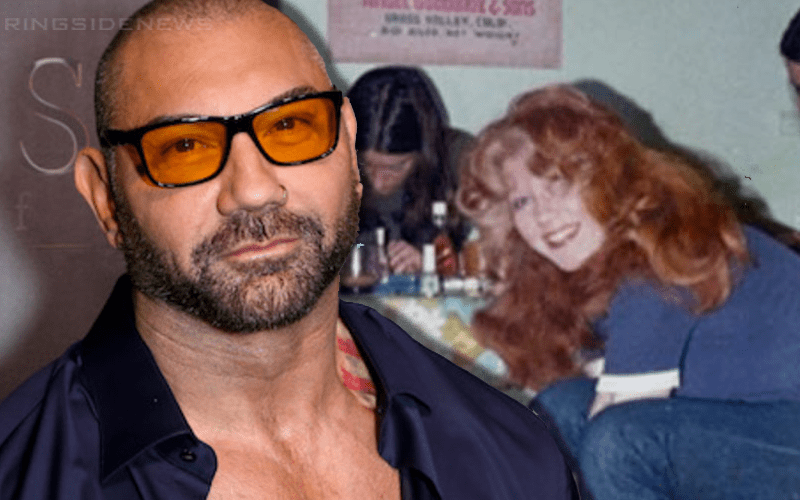 Batista is very proud of where he came from because it helped him become the man he is today. Some fans might not realize this, but Batista’s mother is also a proud lesbian. He wanted a picture of her so he could share a post about how much growing up with a strong role model meant to him, he just didn’t want marijuana to be a part of it.

However, when Batista asked his mother for a picture of her from the 1970’s the only ones she apparently had to share included weed. This didn’t stop how proud The Animal is of his strong mother.

So he included a picture of his mother complete with a marijuana poster and guy rolling a joint in the background with a very touching tribute to his upbringing.

“I asked my mom for a picture of her from the 70’s because I wanted to do a post for 🏳️‍🌈pride month. She sent me this one. Then I said “do you have any without a big marijuana poster and a guy rolling a joint in the background?” She said “ hey it was the 70”s! We were high 7 days a week!” 🤣🤣 anyway this is my mom. Loud and proud when it wasn’t ok to be loud and proud. She never apologized for who she was or who she loved. Which is why I never did either. And never will! A strong lesbian raised a strong man and I couldnt be more proud of her. We lived in the Castro during the Harvey Milk years. She volunteered with every bit of strength and heartbroken energy she had with The Names Project . She still volunteers in San Francisco helping the homeless and mentally ill. She is the reason I am who I am. Every decent part of me as a human being is directly because of my mother. I celebrate #lgbt Pride month with her and everyone else from the community that I was raised in. And if anyone has issue with it, I said before and I’ll say it again, you can suck my balls! I love you mom!

Batista is very proud of his mother and everything she fought for in her life. As time goes on the fight continues, but Batista will never forget being a part of something historic during his childhood even if marijuana was apparently everywhere.