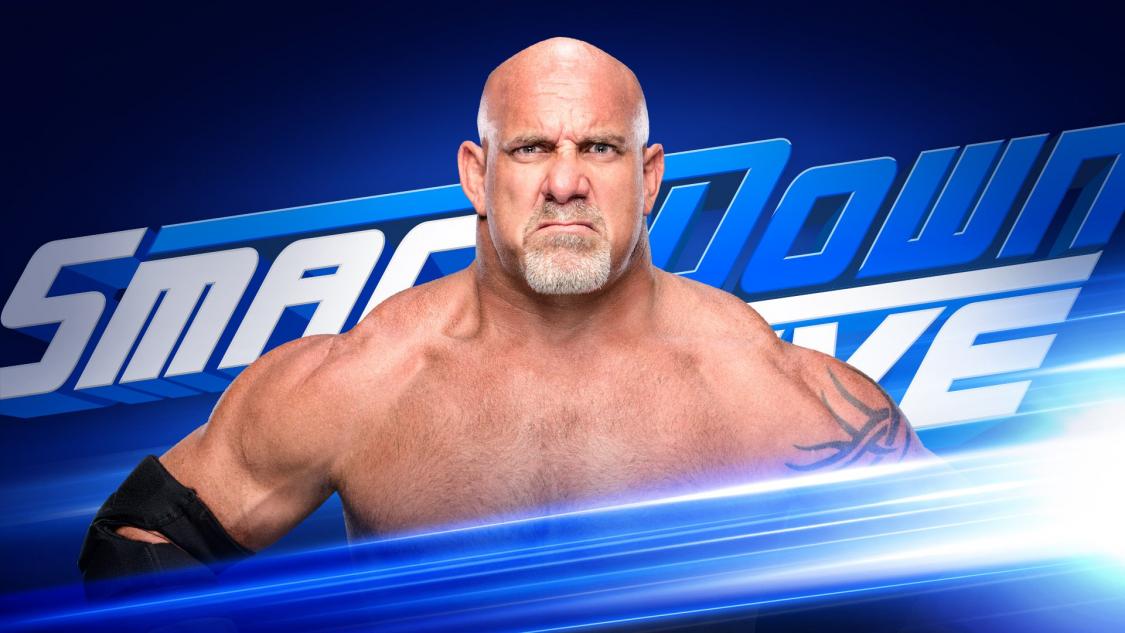 Welcome to Ringside News’ results for WWE SmackDown Live. Check back at 8:00 PM when the show kicks off and keep refreshing for constant updates.

Goldberg will be on the blue brand this week. He will be hyping his match against The Undertaker this Friday at the Super ShowDown in Jeddah, Saudi Arabia.

Lars Sullivan hasn’t been given the chance to speak much because he’s been busy cracking skulls and crushing the Lucha House Party. He will grant an exclusive interview this week. God only knows what he will say.

A Moment Of Bliss is slated to go down tonight on SmackDown Live. Bayley will be her special guest tonight so we’ll have to see what goes down with that after Bliss proved that she is now cleared for action again after delivering some of her own punishment this week on RAW.

We previously reported that Kofi Kingston isn’t expected to be back for SmackDown Live this week because he is still in Ghana. However, Dolph Ziggler could be there to hype their Super ShowDown match.

All that and more is expected so tune back in at 8:00 PM when everything starts.

Kofi Kingston & Xavier Woods came out as Kofi threw pancakes and Woods played trombone. Kingston said he’s learned that life is crazy and full of surprises. He thought he did and said it all.

He said there have been highs and lows and he’s been able to fight through those lows and he was able to win the WWE Title at WrestleMania as “You deserve it” chants broke out.

He said he wants to prove to everyone that anything is possible. Then they played a video package of Kofi going back to Ghana.

As Kofi spoke about inspiring children and hugging his grandmother for the first time in 30 years and then Dolph Ziggler interrupted him. Ziggler said he respects Kofi, but it’s not about him it’s about why he is the way he is.

Dolph said it’s all about him so he got a video package too. Then Ziggler said he gave his soul to WWE, but Kofi’s the one who got the Mania moment. “Thank you Ziggler” chants broke out from around 3 people.

Kofi said he’s been a part of a lot of Ziggler’s big moments because when he won his first IC and US Titles he beat Kingston to win them. Then Kofi made them play the footage of Ziggler laying the US Title down in 2017 and walking away for no reason.

“You walked out,” chants started.

Kofi called him out for quitting because Kingston doesn’t quit. He said that as long as he’s WWE Champion it will never be Ziggler’s turn. Then they played more footage from Ziggler’s attack a couple of weeks ago.

The two teams started out hot and The New Day took control as Zayn took some abuse. Then Owens got the tag and started taking it to Woods. Zayn took a tag and they started implementing some heel tactics to distract Kofi and the referee while Owens did more damage.

Woods tried to fight out of a rest hold, but Zayn brought him back down. Then KO got tagged back in to punish Woods a bit until Zayn took a tag. Woods eventually caught a backheel kick, but Owens ran in and took Kofi off the apron before Woods could take a tag.

Finally, Kofi took the tag and he started lighting up Zayn. He hit some quick strikes and a Boom Drop. Kevin tried to get involve, but Woods took him out.

Then Kingston nailed a Trouble In Paradise for the win over Zayn.

After the match, Ziggler ran in and took out The New Day guys with superkicks. Because he’s a heel and that’s how WWE books things.

Shane McMahon cut a backstage promo about Roman Reigns and they rolled footage from last night’s RAW. McMahon and Roman are still not getting along.

Bayley came out and Bliss didn’t like her coffee. She asked what blue brand incompetent made this swill. Then she made more demands about her coffee and a Bayley asked when she would ask her questions. Bliss said she’ll ask her when her coffee comes back.

Bliss said that Bayley won the SmackDown Women’s Title because she had a good night at Money In The Bank. Bliss brought up how she cashed in the MITB briefcase on the same night she won it too. She also said that when she was champion the title meant something.

Bayley wasn’t taking the bait. She’s looking for new opponents. Then Bliss told her to hold that thought because her coffee was coming. Bayley slapped the coffee out of her hands.

Then Carmella came out to moonwalk and say that she needs to be challenging for that title. Then Charlotte Flair walked out. She informed everyone that there is a #1 contender’s match for Stomping Grounds. Mella vs Bliss vs Flair.

Carmella went backstage and she was looking for R-Truth who she found hiding out. Truth’s been using Mella’s phone to try and call Shane McMahon. R-Truth said the 24/7 Title is ruining his life. Truth also apologized to McMahon for ruining Shane McMahon appreciation night.

Then Shane McMahon booked a standard rules match for the 24/7 Title.

This is a handicap match too. It was said that nobody can pin Truth during the match except fro Elias. However, after the match is over it’s anyone’s game.

Elias threw Truth out of the ring and he got pummeled. Then Elias hit a knee and pinned Truth to win the match.

Everyone swarmed Elias and he got out of the ring and started to crawl away. Then Truth met him and they went under the ring with a referee. Then R-Truth came back out as champion.

Aleister Black cut another promo about how his track record speaks for itself. He what he inflicts isn’t your daddy’s WWE. He was daring someone to summon the darkness.

Shane McMahon came out with The Revival who count as 1 Wild Card from RAW.

Greg Hamilton announced McMahon as the best in the world and a ton of “CM Punk” chants started. Shane put over The Revival and they showed a clip from last night where they demolished Reigns on RAW.

Shane talked about how to train a dog and he’s going to neuter the Big Dog at Super ShowDown. Then Roman came out who took out The Revival on the stage.

Roman went to the ring after Shane, but Drew McIntyre was waiting and ran up to nail a Claymore Kick on Reigns. Then he rolled Roman in the ring so Shane could spear Reigns and do some mocking poses.