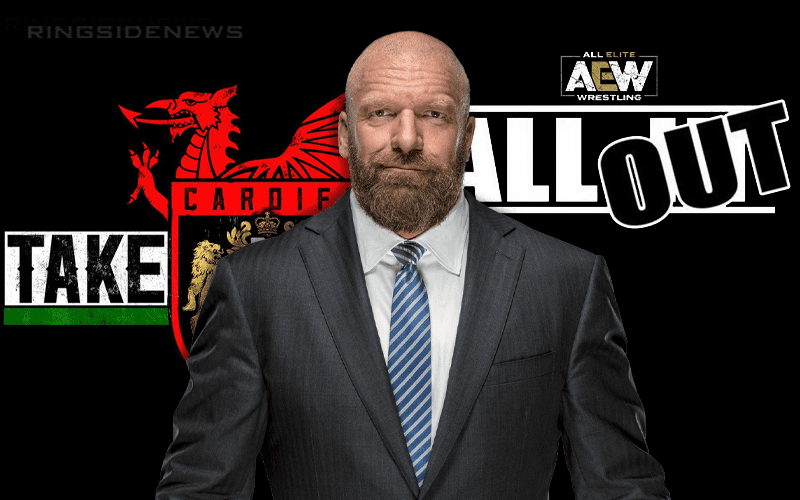 AEW’s next tent pole event is going to be All Out on August 31st in Chicago Illinois. It was widely thought that this would be the date and location of their next big show well before that announcement was made official. However, WWE also scheduled a big event on that day.

In the middle of NXT TakeOver: XXV the company announced that NXT UK TakeOver: Cardiff will be on August 31st. Their event will start at 3:00 PM so it is likely to be wrapping up just as AEW All Out starts.

During a post TakeOver media call Triple H was asked about why these two dates conflict with each other. He had a very interesting response because apparently, WWE has known about the date and the building since before WrestleMania, but they waited until June 1st to let everyone know what the plan was.

“I will just say this to everybody in here, contrary to I’m sure some of the buzz, the date of August 31 is a date we’ve had for a long time. That building has been booked with us in Cardiff, geez, long before WrestleMania 35 I think. We just hadn’t announced because it wasn’t the right time, and you don’t want to announce something for a brand 6 months out or whatever, at least I don’t the way I see it.”

“Tonight was the right night to do it, it had nothing to do with anybody else, to be honest. We will take place live in prime-time in the UK and be on in the afternoon here in the US, so it is what it is.”

“But I’m real excited for the UK brand of NXT. I feel like it’s going back in time, and kind of being in the beginning where this was, and if you look at the talent that’s there, and the talent that’s coming out of there, it’s spectacular. And I think there’s some competition within NXT, the NXT header itself, so while we talk about statements, I know that the UK brand in Cardiff, on the 31st, is gonna be looking to make a statement as well, and they’re going to want to be able to walk out of that building in Cardiff, look across the pond here and say, ‘Follow that.’ So, I would expect a statement to be made there as well.”

NXT UK sounds like they’re in competition with NXT from the way Triple H put it. Announcing a show six months in advance might not be Triple H’s plan, but maybe they need to get on that in the future. Because the timing of this announcement is not going to squelch any of the fiery opinions that WWE booked this date as a way to do damage to AEW All Out.

Either way, we will be bringing you all of the updates from both events right here at Ringside News when the time comes. August 31st will be a very busy day for pro wrestling news.