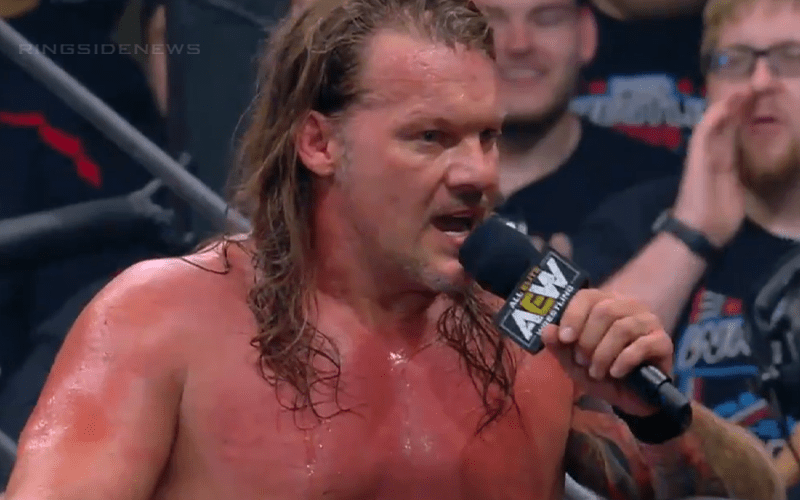 Chris Jericho defeated Kenny Omega at AEW Double Or Nothing, but he wasn’t finished because Chris had something to say. It would have never been like this in WWE.

Y2J launched into a promo on the AEW fans and how the company was for him. As he demanded a thank you from AEW, Jon Moxley made his entrance and prematurely ended the promo.

While speaking to Busted Open Radio, Chris Jericho discussed AEW’s style as opposed to WWE. His Double Or Nothing promo was totally off the top of his head with no writers needed.

Omega and Jericho didn’t need an agent mapping out every detail and camera angle of their match either. The only two words that Jericho needed to remember was “thank you” because that was Mox’s cue to break the IWC wide open upon his big debut for All Elite Wrestling.

“[Raven] texted me and said great match your promo was amazing, what a great promo. I had forgotten about that, you know why? Because the promo was just a time kill in-between the match and Moxley’s appearance. His cue was when I said I demand a thank you.”

“So I wanted to build it up a little bit it wasn’t even intended to be a promo. Now, if this was WWE they would have written this promo and you’d have to remember this promo and what’s the cue and what’s the shot. The only cue [at Double Or Nothing] was when I say ‘thank you’ then Mox walks out. Other than that, I could say whatever the hell I want. I wasn’t micromanaged or over-analyzed or censored. I just said whatever came to my head as a thirty-year heel will do and people say what a great promo that was.”

“To me, that was a really cool moment and kinda showed what AEW is all about which is when you’re good and when you’re an artist you let your artist be artists.”

“We don’t have to go through everything note by note for Chris Jericho to do a promo. We don’t have to have give the agent every move that Chris and Kenny are going to do to get the right camera shots. We’re all pros. Find us, get the shots organically.”

Both Chris Jericho and Jon Moxley could both probably go on even more about the creative frustrations in WWE. Therefore, we can only hope there is a second edition of Mox on Talk Is Jericho.

It sounds right now that everything is as it was previously reported to be within WWE. The creative process is stifled and controlled by Vince McMahon who believes that everything they do is good. Each portion of the show is micromanaged which is why it doesn’t feel organic. If anything, AEW Double Or Nothing should prove to WWE that it is possible to put on a great show without needing to control every aspect of the product. It’s too bad that Vince McMahon only watches his own product.