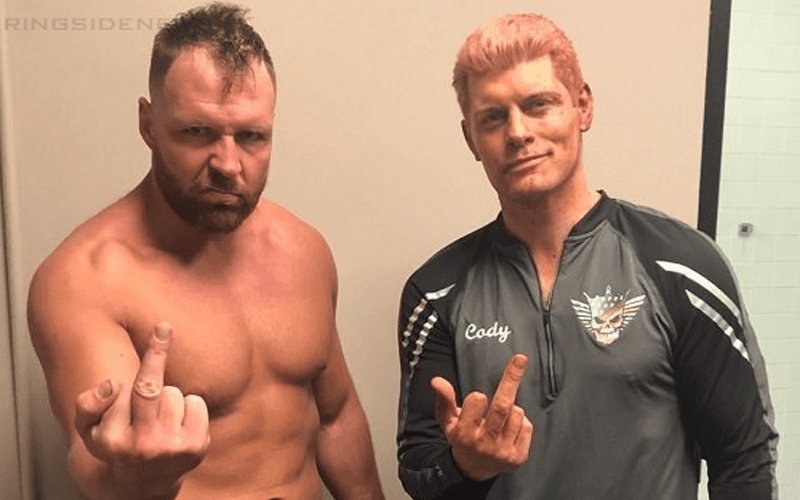 Jon Moxley might be with a new company in AEW, but there are a lot of familiar faces around and a couple of them are on top of the roster.

Moxley discussed his relationship with Cody while speaking to Talk Is Jericho. The two used to get along in WWE and bonded over wrestling. Because they are both fans of wrestling and love it which is one of the biggest reasons why Jon Moxley agreed to start with AEW despite a slight fear of signing another contract with a corporation.

“For me it’s about being the best version of myself finally. Having the creative freedom to come up with an idea and just do it. We’re gonna have that in AEW. From the first time I talked to them — I’ve always been friends with Cody, always vibed with him.”

“Cody’s kinda like me where first and foremost we’re wrestling fans. Like when was Stardust and stuff when he’d be painting up he’s be in the locker room and he’d have his little iPad and he’d put on the WWE Network and just put on like old WCW or like whatever. We always me and him we would sit there and watch all this wrestling and talk about it because we just love, we love wrestling. He has a very… we think of wrestling in a very similar way.”

Cody and Jon Moxley posed in a pretty epic backstage photo-op after Double Or Nothing. Perhaps Cody will get in the habit of doing a middle finger pose with new signees after big debuts, especially if they come from WWE. Triple H poses with new stars, so why not Cody?

Moxley is now in a place where he can really express himself. This is exciting for fans of Moxley, especially his days when he was deep in the indies. However, some WWE fans who only know him as Ambrose have no idea what they’re in for and could be shocked as they only scratched the surface of the true lunatic fringe in Vince McMahon’s company.