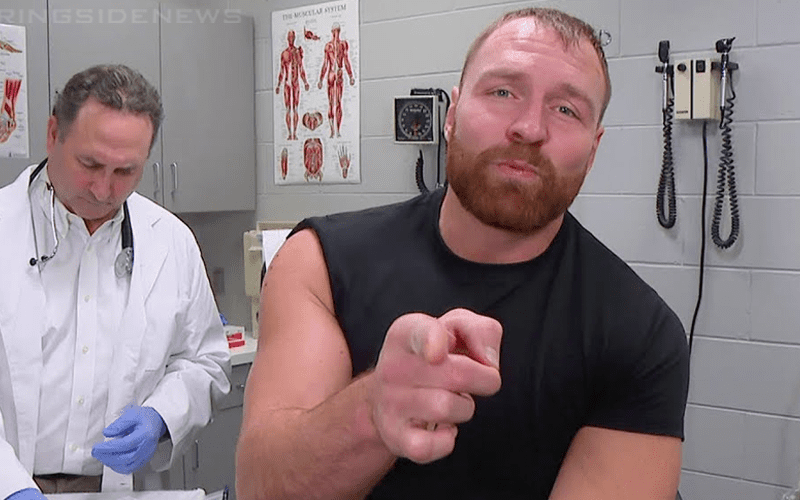 Jon Moxley is glad he didn’t walk out of WWE because he could have “ended up in some legal stuff,” but this was definitely not a good time for his WWE career.

While talking to Talk Is Jericho, he revealed a time when he almost walked out of WWE.

The former Dean Ambrose only had eight months left on his contract, but Mox was remaining hopeful that things might change for him in WWE. This was the RAW in Milwaukee and Ambrose woke up with a text from a writer informing him that WWE wrote a backstage segment for him.

Dean Ambrose was going to be getting a ton of rabies shots and inoculations to protect himself from the “disgusting fans.” If you need a refresher on how that segment turned out you can check it out below.

Moxley said that he replied to the writer saying: “I f*cking hate that” to which the writer said: “Yeah, I know.”

He wasn’t very happy about arriving to the building for RAW and by the time he showed up the word had already gotten out that he didn’t like his segment. Vince McMahon approached him and said that he heard Dean “wasn’t very excited about” the promo. Ambrose didn’t lie. He hated the “goofy crap” and he had been “butting heads with Vince about this since February.”

Jon Moxley said they handed him a script and then he got “herded into a sexual harassment meeting” and he was seething the entire time that he had to sit through that mandatory meeting for the roster.

However, after the meeting before Ambrose could get to Vince a writer intercepted him and said that McMahon wanted to see him and make sure that he knew his segment “is not comedy.”

“So Vince anticipated that I was gonna come storming into his office and go ‘Why am I doing all this prop comedy all the time?’ Because I’d been having the same argument with him for like a year now.”

He went to Vince’s office where McMahon tried to convince him that the promo wasn’t comedy. Vince said “this is such good stuff, it’s so well written and it’s gonna get you a ton of heat.”

Moxley said that he was doing more “Carrot Top prop comedy” to which McMahon said there were no props. This is when Ambrose replied asking: “Then what is the actor that we hired to play the doctor and the giant syringe? Is that not a prop?”

“He’s like ‘I know you will now get outta here ya scamp.’ So we go do the thing, it’s awful you know I can’t save it, you know? We were able to pre-tape it. It got green lit by Vince. Everyone’s high-fiving they’re like ‘Vince LOVED it’ I’m like ‘Great.'”

“So I was able to get out that night. I couldn’t have gotten out of that building faster. Earlier in the day I was like, ‘I gotta walk out.’ I remember having a feeling of dizziness like a weird pit of my stomach dizziness and I remember talking to some of my friends like ‘I can’t work here, what is this? What are they doing? It’s so embarrassing.’ Like, actual dizziness. It’s like I can’t believe this is happening.”

“So I bolt out of there and I go to the airport and I sit down at the bar in the airport and it’s just like I’m so depressed. Because I was like that might be the thing.”

Moxley said that he was always afraid of doing a segment that his character in WWE couldn’t recover from. He thought getting a series of shots in a doctor’s office on RAW might have been that segment to kill his character. He was always able to recover in the past, but he thought that he might not be able to come back from that one.

That promo actually had a line about Roman Reigns, but Moxley refused to say it. He said it was so bad that he wouldn’t even repeat it while talking to Chris Jericho, but “it would have been a thing where someone would have had to get fired, maybe me. They might have lost sponsors like the Susan G Komen.” He said whoever wrote it should be ashamed of themselves, but if he would have said the line it would have been on him and not on Vince McMahon.

Thankfully, Vince McMahon didn’t force Ambrose to say the line about Roman Reigns’ leukemia like he had in the past. However, it didn’t keep Ambrose from hating his job any less.