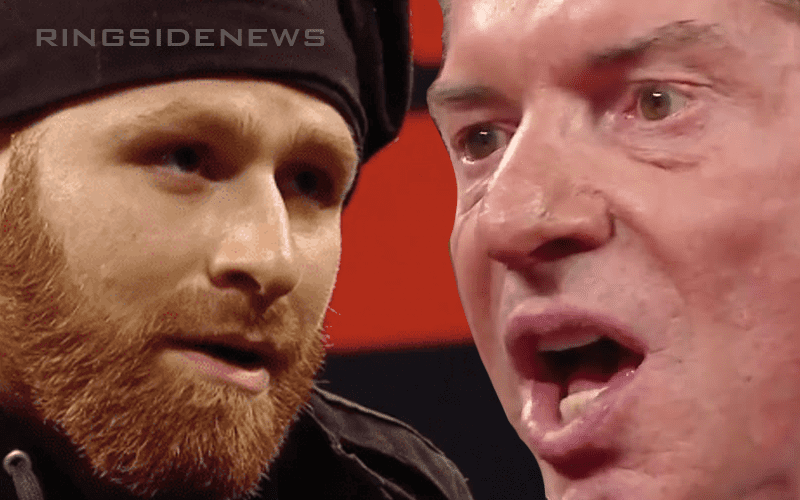 Sami Zayn mentioned AEW on WWE RAW and people lost their minds. It was a big move and plenty of people took notice before WWE tried their best to erase it from their social media and replays.

Bryan Alvarez spoke about this situation on Wrestling Observer Live were he said that two stories are coming out about this line about WWE’s biggest competition. It’s hard to know which one to believe at this point, but one of those stories is that Vince McMahon was furious because of it.

“This is from talking to multiple people and if you heard the Dave show last night you know that there is a lot of confusion. We’re twelve hours past that and it’s still confusion, but I’m going to tell you everything that I know about the story… you ready?”

“So these are two facts about the situation, right? There are absolutely people who insist that Sami was given the okay to mention AEW, alright? I even heard from one person who said in the script that went around in the morning it was in the script he was gonna mention AEW. One person said that.”

“I had another person say and Dave had people tell him that it was a scripted line, alright? Now, with that said I heard from multiple people. Far more people in fact and people who had heard from other people who all said the line was not scripted. The line was not supposed to be said. I was also told from multiple people that when it happened Vince flipped his lid. He was furious that this happened.”

It sounds like with these two conflicting stories being sent out of the company that one of them has to be right story.

Some are saying Vince McMahon was livid and others say it was planned. If WWE did plan the line about AEW it might be to their best interest not to cop to planning it because giving legitimacy to another competitor that is making a lot of noises on TNT might not be the best word to get out for their stock price’s sake.

However, there were way more people who believed that Vince McMahon was legitimately angry and was not working the boys or anyone else at all with this move.