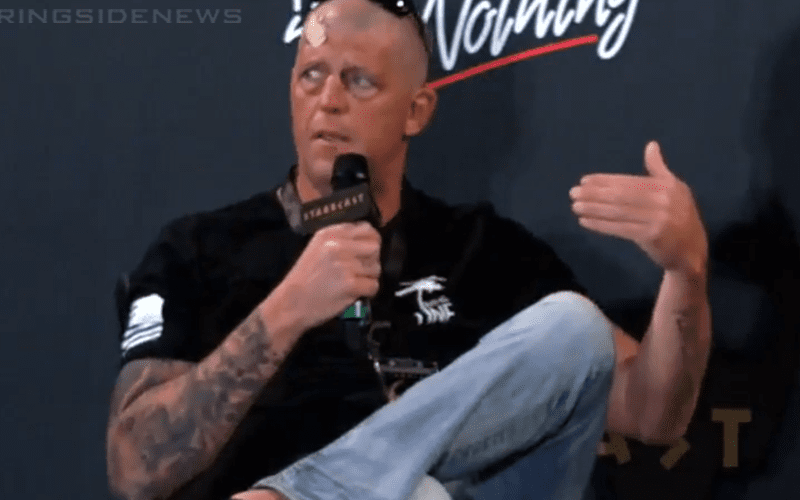 Dustin Rhodes is now an AEW star and he left the Goldust character behind after two decades. However, he is very happy to be out.

While speaking to Inside The Ropes at Starrcast, Dustin Rhodes went into detail about what drove him out of WWE. He got tired of sitting in the back and only being featured as an extra when he felt that he had so much more to give.

Probably for the last four years, a lot of people love their jobs and a lot of people hate their jobs. I love pro wrestling. Pro wrestling is my first love and for the past four years with WWE I kinda lost my passion because let’s face it, you’re sitting in the back, you’re not doing anything and it’s really hard it’s frustrating when you have so much to give, but time is running out because you’re getting older.”

“It sucks when you’re not being picked and you’re pitching these ideas to the writers, to the creatives, and to Vince and to whoever else will listen, but nothing happens and it’s like ‘Oh we’ll just put you in a backstage segment standing in the hall while Goldberg makes his f*cking entrance. It’s like thanks, I appreciate that, but no thanks”

“I’d rather be doing something with substance on the show like a storyline and whether I deserve it or not I don’t know, but that’s what I wanted. That’s I desired, that’s where my passion was and I lost that along the way and I wanted out.”

“It’s like prison, it really is. It’s one of the prisons where they take very good care of you in, but I needed to go do something else man because I’d been there for so long and they had taken good care of me, but I needed to get out there and breath and find my passion again. There’s other things I want to do in life before it just ends. Because you never know you take every day for granted tomorrow might never happen.”

Dustin Rhodes said that he wants to act and open a wrestling school and finally getting out of WWE was a breath of fresh air.

AEW fell into his lap with a match against Cody Rhodes. They might have been told by WWE that a Rhodes Brothers match wasn’t good enough to be on WrestleMania, but they brought a match to Double Or Nothing that would give any Mania main event a run for its money.