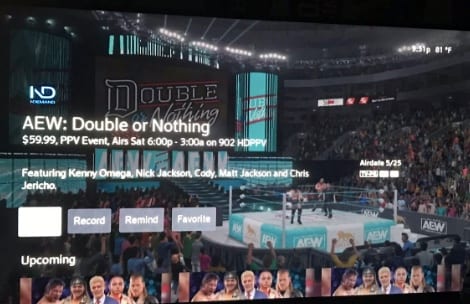 There have been many question marks over whether or not All Elite Wrestling will be able to compete against WWE, in a similar manner to how World Championship Wrestling did back during the Monday Night Wars.

Those questions are probably going to continue long after Double or Nothing finishes airing this weekend, but prior to that, one of the companies associated with the show certainly hasn’t done AEW any favours with their preview.

Xfinity can be used to order Double or Nothing this weekend, but fans noticed something that was much more intriguing than the price of the pay per view itself.

This probably isn’t the worst thing in the world, but you certainly have to question the logic of Xfinity doing this. After all, it’s not like they’ve got anything to gain from a move that is quite clearly going to annoy the bosses at AEW.

In terms of Double or Nothing itself, though, it certainly feels like they’re on the path towards doing something really special this weekend – which is all you can really ask for given how young AEW is right now.

At the very least we’re going to see some great wrestling, and in addition to that, the general hope is that we’ll see some story-based work that sets up the beginning of their weekly shows later on this year.

Sure, they’ve had a few setbacks already, but it’s nothing they can’t fix – because they’ve still got a bunch of momentum going for them right now.