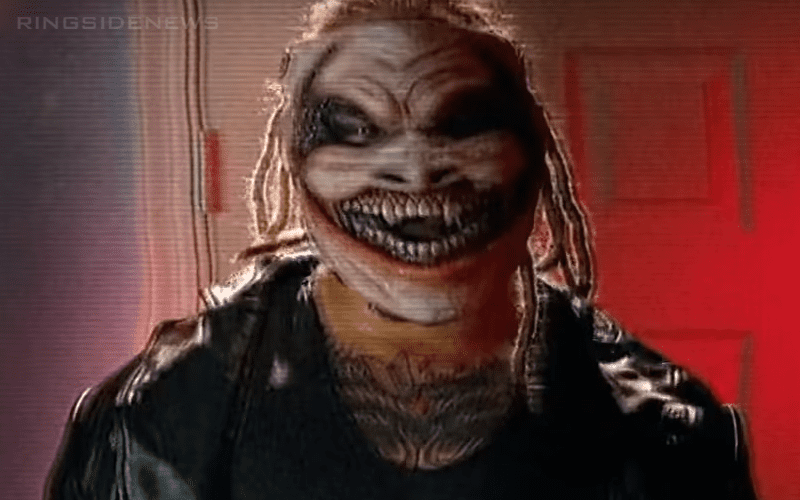 Bray Wyatt went away for a while after leading people to follow the buzzards for years. Then he came back as the Firefly Fun House lit the way for all the children under his spell. It was a dramatic transformation, but still, somewhat the same.

The demented Pee Wee Herman character revealed something that he has been working on this week. It was one of the darkest moments in recent WWE history. Wyatt revealed a mask and “Yowie Wowie” speaks volumes now.

Kyle A Scarborough, one of the most influential minds behind Bray Wyatt’s new epic mask spoke about his interactions with The Eater Of Worlds. He also revealed some amazing communication they had and how excited Wyatt was for this new chapter for his character.

WWE was giving Wyatt some problems apparently and they wouldn’t approve the new character on just his pitch. They wanted to actually see something. When Vince McMahon saw his renderings the project was finally green lit and it was off to the races.

At one point Wyatt told Scarborough that “you saved my career” after he needed the twisted visualizations to bring his new persona to life. Wyatt’s career was in a rut and he really needed this refresher.

From concept to reality.
This is still surreal.
I’ll never forget the night Bray texted me, beyond excited with this idea he has and needed my help.
“Needed” my help. Still weird…
He called me, and with the excitement of a child, he ran off this long list of descriptions and concepts, flooding my text messages with doodles and images.
He had an idea in mind that needed help. He had the team of people to create the idea, but didn’t have the vision.
I’ve never been more scared to take 20 ideas and details and try to create a drawing that showcased his thoughts (which putting it mildly, are about as close to insane as the character).
When I was done, his response blew me away.
I was told I “saved his career”.
Now, that’s absurd, but he was in a rut, and the WWE weren’t giving him the green light based on descriptions alone.
My drawings were literally on the desk of Vince McMahon.
VINCE MCMAHON saw my renderings to help give him a visual guide for Bray’s idea and it was green lit.
Still crazy to think about…
From there I was kept updated with the sculpting work of Jason Baker, FX designer for Tom Savini, who’s work includes many WWE performers and especially Corey Taylor of Slipknot.
All these vignettes on WWE RAW built up to this, and we’re still not done.
I had no idea what was going to debut and when, mind you.
So last night, I’m at the TOOL concert, and almost literally in the moment I find out the Blues are close to winning the game, I had a text from Bray that simply read, “Congrats brother. We changed wrestling forever.”
I began to see messages from friends and other fans who shared the image of the televised segment.
I told him I was beaming, and that I was so happy for him to see something he loves so much come to life.
He responded, “WE made this happen.”
I’ll be honest, I had tears.
In the middle of a loud ass rock concert; TOOL of all bands, thanking God for the gifts he’s given me, because Lord knows I don’t deserve them, but I don’t take any of it for granted.
This may all be meaningless to many, perhaps cool to some, but I’ll leave it with this:
One of my dreams was to go to school at Tom Savini’s makeup FX studio and design movie monsters. Financially, we couldn’t make it happen. Of course I was a lifelong pro wrestling fan, and Bray Wyatt was legitimately one of the only faces in wrestling that excited me to tune in.
Now, thanks to my tattoo work catching his attention, I’ve designed the look of the man’s on-air character with the help of artists who work for Savini.
I still can’t process all of this fully.
Anyway, I was contractually obligated to keep my trap shut til it debuted, so that’s my long-winded story.

We will have to wait and see how things progress with Bray Wyatt from here. If he is a happy children’s host character backstage, but transforms into a mask-wearing monster in the ring that could be very interesting.

One thing is for sure that this new Firefly Fun House persona seemed like a very serious situation if Wyatt said it saved his career.