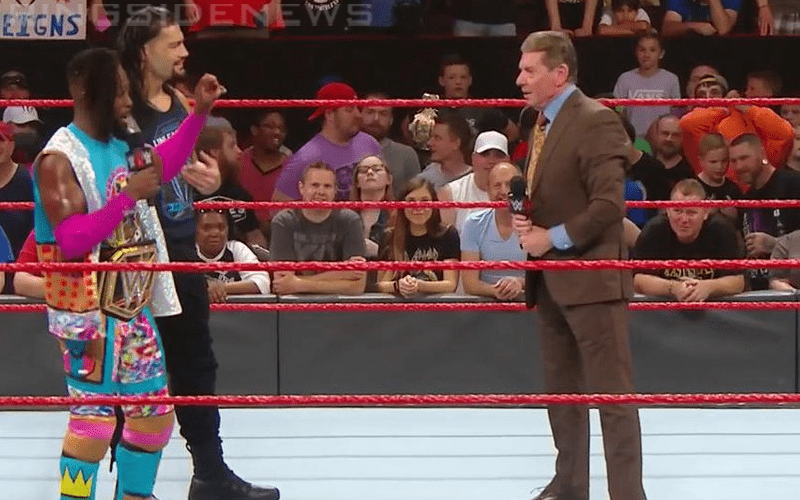 RAW and SmackDown Live have different rosters. Vince McMahon showed up on RAW this week and kind of put an end to that.

If you want our entire live coverage of Monday Night RAW you can click here.

Roman Reigns, Daniel Bryan, and Kofi Kingston came down and they had a back and forth with Vince McMahon. Then McMahon tried to gain some order and he came up with a “brilliant idea” before proclaiming himself as a “genius.”

Vince McMahon had an “epiphany” that every now and then he’ll have a “Wild Card Rule” where three members of RAW and SmackDown will randomly switch teams for the night.

This was shut down by Kofi Kingston saying “whatever you need to tell yourself,” to McMahon when he said that all of this was his plan.

AJ Styles came down later and teased that he could take a couple of his friends to SmackDown and Vince said it is a random thing. So now we’ll never know when people will jump from brand to brand because of the “Wild Card Rule.”

It will not surprise us at all to discover that RAW was being written right up to the show yet again this week. All the while, Vince McMahon was saying this is a night we’ll never forget.

In the process of the opening segment, Vince McMahon booked Kofi vs Bryan in a WrestleMania rematch for the WWE Title, Roman Reigns vs Drew McIntyre in a Mania rematch, and AJ Styles & Seth Rollins vs Bobby Lashley & Baron Corbin.

WWE is getting very interesting as they go for this new Hail Mary. Let’s just see if people tune in.