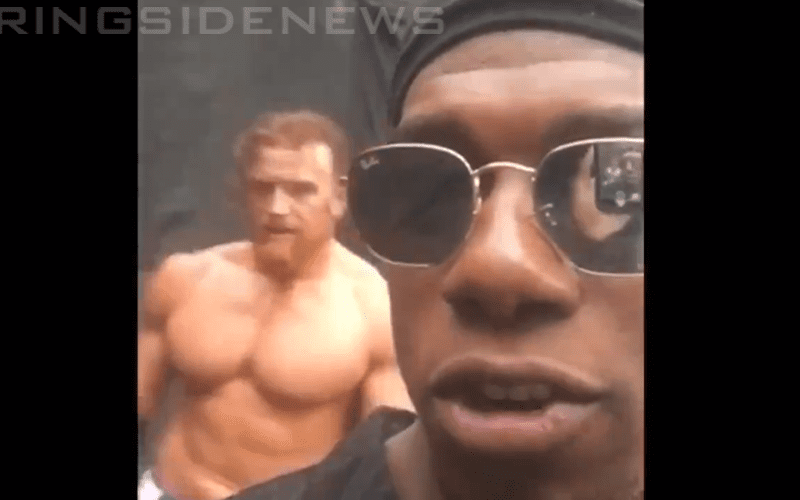 Velveteen Dream successfully defended his NXT North American Title against Buddy Murphy on NXT Television. It was a big surprise and a great match as Murphy went back to NXT for one night only before being called over to the blue brand during the Superstar Shake-Up.

We previously reported that Velveteen Dream was backstage at WrestleMania and chastised Murphy after losing the WWE Cruiserweight Title to Tony Nese. Apparently, this promo was seen by a lot of people who believed it was a shoot.

Mike Johnson explained on PW Insider Elite audio that Velveteen Dream’s cell phone promo backstage at WrestleMania actually caused three people in WWE to reach out to him. They couldn’t believe it took place while they were obviously building toward the match that went down last week on NXT.

“You know what’s funny? I won’t say who it was because they will be embarrassed. I had three people who work for that company. Two of them were wrestlers and one of them works in an office setting, let’s say say to me, ‘I can’t believe how disrespectful the Velveteen Dream was. He was filming that without permission.’ Okay? ‘Like she’s gotta have heat, right?'”

“I’m like I don’t think it’ll be on social media for any length of time if he did something he wasn’t supposed to do. You know, this isn’t ‘Call Me Up Vince’ on my tights without telling anybody. Where it’s like it’s too late he’s out there we can’t stop him now. Social media’s a different animal.”

It looks like that worked promo backstage at WrestleMania worked like a charm. It added something extra to Dream’s match against Murphy and then the former WWE Cruiserweight Champion soon found himself on SmackDown Live. Let’s just see how long it will be until we get another match between Buddy Murphy and Velveteen Dream.