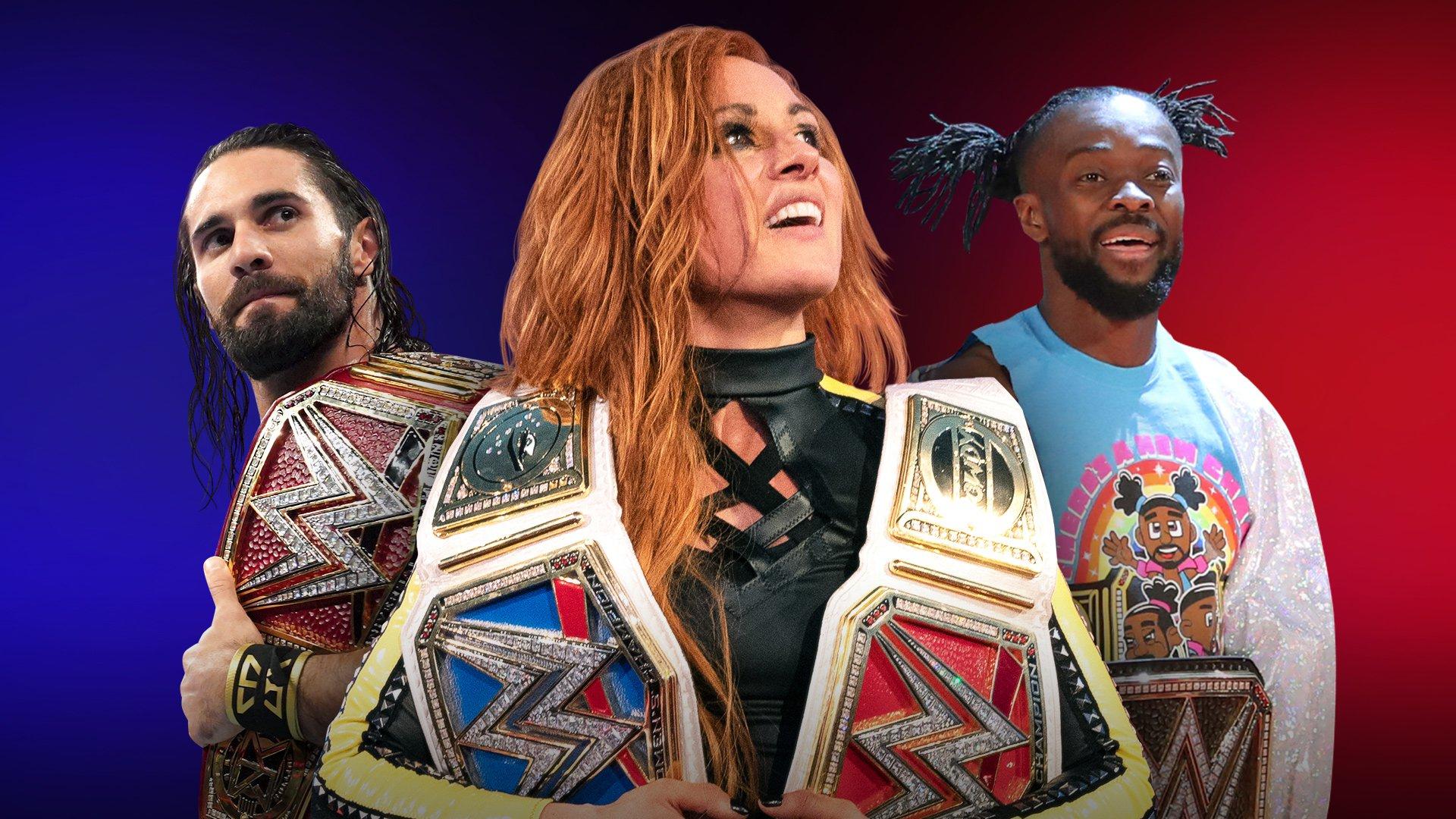 Tonight’s show is set to be a monumental one as we’re getting another Superstar Shake-Up. The Shake-Up is set to take place over the course of tonight’s Raw and tomorrow’s SmackDown Live. We have no idea which Superstar’s are moving to which brands, but that’s what makes the Superstar Shake-Up so exciting; will Kofi Kingston and Rollins trade places? Where does Becky Lynch end up considering she has both titles? What about Samoa Joe for Finn Balor? There’s lots of ways the Shake-Up could go, so let us know who you’d like to see switch places!

Beyond the Superstar Shake-Up tonight, we’re also being teased a second altercation between Becky Lynch and Lacey Evans, after the two brawled on last week’s show. The two are set to go toe-to-toe moving forward, but on which brand? And if they remain on Raw what does that mean for SmackDown’s women? It’s all in flux.

Speaking of flux, the WWE Universal Champion, Seth Rollins, is without an opponent right now. That’s not a big deal right now because the next PPV isn’t for another month, but WWE is teasing a new opponent emerging tonight. Will it be Drew McIntyre? Roman Reigns? Or will Seth be traded to SmackDown Live and battle with the likes of Daniel Bryan? Yes please.

WWE is also teasing new feuds for Bobby Lashley and Roman Reigns, and perhaps those two will lock horns moving forward. There aren’t a lot of feuds on the table right now, and that’s what makes the Superstar Shake-Up so exciting. Remember to follow us on Instagram and download the Ringside News app to stay up to date, and enjoy the show!

Raw opens with Stephanie McMahon making her way down to the ring, followed by her brother Shane McMahon.

It’s a big night, so @StephMcMahon is naturally kicking things off on #RAW! #SuperstarShakeUp pic.twitter.com/2c2BMarGBe

With the representatives of Raw and SmackDown Live in the ring, we can get the Superstar Shake-Up underway. The fans in Montreal boo them loudly. Shane forces the ring announcer to introduce him again, as the Best In The World. The fans then chant “CM Punk” while Shane tries to speak some French. The fans chant “you suck”, to which Stephanie tells them Kurt Angle already has his last match. Stephanie says she didn’t know Shane spoke French and he said he speaks Parisian French, not the dirty crap they speak here in Montreal.

Stephanie finally gets on with the show, talking up the importance of the Superstar Shake-Up, saying anyone can move brand and teams can be broken up. Stephanie begins to introduce a new Superstar to Raw, but Shane interrupts her and wants to show some of the best moments in the build-up to WrestleMania – which were all Shane beating up The Miz and his Dad. Back to Stephanie, who introduces the first Superstar who is moving to Raw…

The Miz slides in from behind and attacks Shane McMahon. The two brawl out of the ring and Shane slams Miz into the ringpost, before teeing off on him against the barricade. The Miz blasts Shane with a steel chair, then again, and Shane escapes up the ramp. The Miz stands tall in the ring with the steel chair and he’s bust open. He’s officially a part of Monday Night Raw.

Ricochet makes his entrance – with slightly altered music that sounds like a Stormtrooper shooting at the beginning. Ricochet is officially a part of Raw. His partner, Aleister Black comes out next and he too is officially on the red brand.

Black and Ricochet are teaming with Hawkins and Ryder, while The Revival is teaming with the NXT Tag Team Champions, War Raiders….or as they are now known, The Viking Experience. Their names are Erik and Ivar. That is a face palm if there ever was one.

Scott Dawson starts off with Curt Hawkins and he floors him with a shoulder tackle. Hawkins catches Dawson with an arm drag before tagging in Zack Ruder. They hit a Russian leg sweep/side effect double team move. Ryder then makes the tag to Ricochet, who basically tags Black immediately.

Black grabs a hold but Dawson tags Dash, who floors Black before unloading some chops in the corner and tagging Ivar of The Viking Experience. Ivar hits Black a few times before tagging Dawson, who does the same before tagging Dash.

Black forces Dash to the corner and tags Ricochet, and they hit a double team kitchen sink/dropkick. Black tags back in and kicks Dash before getting floored with a knee. Ivar tags in again and immediately tags Erik. Black looks to take both out with a springboard moonsault but they caught him in mid-air, followed by Ricochet coming off the rope with a dropkick to take them out. The Revival storm the ring, as do Hawkins and Ryder, and get hit with double back body drops and roll from the ring. The babyfaces are in control.

We return to see Erik controlling the pace against Curt Hawkins. Ivar tags in and drops Hawkins with a knee for a near fall. Erik tags back in, and he scoop slams Ivar onto Hawkins for another near fall. Erik applies an arm bar to Hawkins, but he fights up and attacks The Revival on the apron. Erik then stiff clotheslines him for his troubles.

Ivar tags in takes Hawkins down with a shoulder block – this match has way too many tags. Speaking of which, Dash Wilder tags in and stomps Hawkins into the mat. Dawson comes in and he drops Wilder onto Hawkins with a leg drop to pick up a near fall. Dawson then applies another arm bar and keeps the pace slow. Wilder tags back in and continue the beat down on Hawkins, and applies a chin lock. Hawkins eventually fights out and makes the tag to Ryder.

Ryder runs over Dawson and dropkicks Wilder off the apron. Ryder hits Dawson with a flapjack before hitting a running forearm in the corner. Ryder punches him down in the corner. Ricochet and Black take out The Viking Experience. Dawson quickly gets away from Ryder and tags in Erik. Ryder hits Erik with a flying leg drop for a two count. Ricochet and Black take out The Revival.

Ricochet scales the ropes and looks for a moonsault to the floor on Dawson but almost completely missed. Inside the ring, Ivar clotheslines Hawkins, then he and Erik throw him over the top rope onto Ricochet and Black. Erik viciously knees Ryder in the face. Ivar is tagged in, and The Viking Experience hits The Fall Out for the win.

Winners: The Revival, The Viking Experience

We get a promo video for Cedric Alexander, who will be joining Raw full-time.

Finn Balor makes his entrance in Montreal, and he’ll be facing a Superstar arriving from SmackDown Live after the break – my bet is Kevin Owens.

We return from the break to see me wrong, the newest Superstar on Raw is not Kevin Owens:

Vega gets on the horn and introduces the two of them to the WWE Universe. She says Finn Balor is a man who does extraordinary things, but so is Andrade. She says Andrade can speak multiple languages, and says he wants to speak to the Montreal fans in their native language. He says “merci” before speaking fluent Spanish and the fans chant “what?” in between.

They lock-up and Andrade floors Finn from behind, before sending him into the corner and dropping him with a flying knee. Andrade follows-up with double running knees in the corner for a two count.

Finn counters Andrade and connects with a dropkick. Balor then reverses an Irish whip and hits another dropkick. Balor runs at Andrade, and hits him with a snap DDT. Andrade rolls from the ring and Finn looks for a soccer kick from the apron but Zelina gets dragged in front of Andrade and Finn halts. Andrade uses the distraction to swipe Finn and drop him on the apron to the floor.

Back live and Andrade is stomping Balor down in the corner. He looks for the double knees again but this time Balor avoids it. Finn attacks Andrade in the corner and hits a flying dropkick. Finn is favouring his left knee, and it causes him to pause and allows Andrade to take advantage.

Finn reverses Andrade to hit a reverse DDT for a near-fall. Sling-blade by Balor. He then looks for the corner dropkick but Andrade did a cartwheel into a Pele kick for a two count. Andrade scales the ropes for a moonsault but nobody’s home, however he landed on his feet and did another moonsault and Finn got his knees up. Finn then hit the corner dropkick and climbed the ropes for Coup de Grace but Andrade knocked him down. Andrade then looked for his signature hammerlock DDT but Finn rolled him up for a near-fall.

Andrade was clotheslined from the ring and Finn hit him with a tope. Finn tossed him back into the ring but then Zelina Vega came off the apron with a hurricanrana to Finn while the referee was tending to Finn. Vega sends Finn back inside, where Andrade hit the Hammerlock DDT for the win.

We see a video of last week’s Raw, when The Undertaker interrupted Elias and hit him with a Tombstone piledriver. Elias will be live, next!