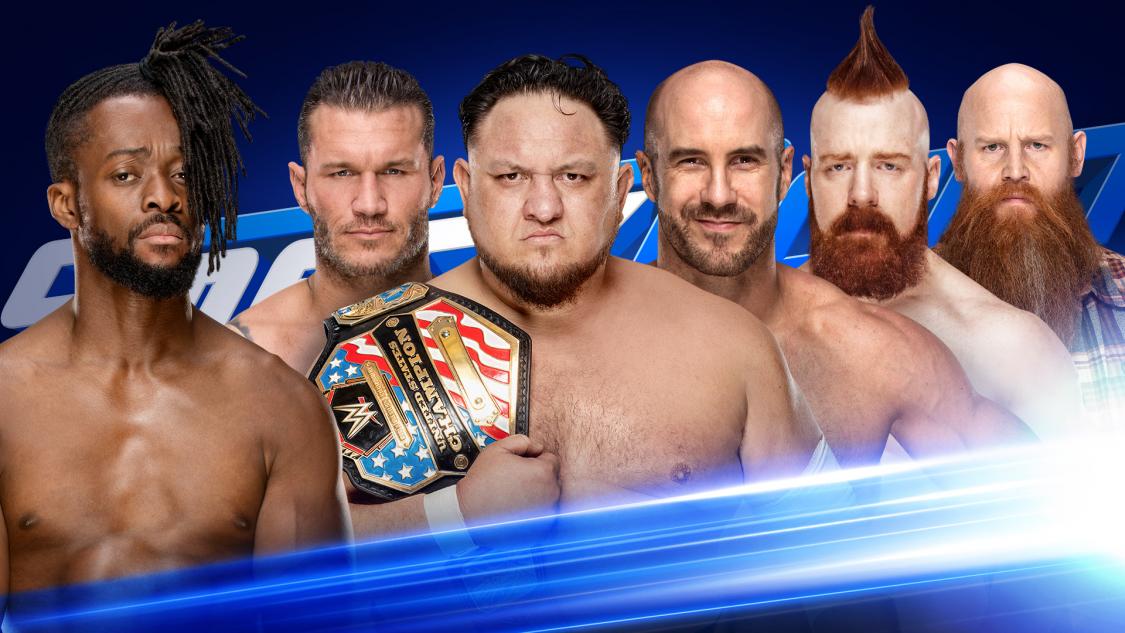 Welcome to Ringside News’ WWE SmackDown Live results. Please keep refreshing during the broadcast for constant updates. Everything will kick off at 8:00 PM EST.

Tonight’s SmackDown Live will determine a lot for WrestleMania 35. If Kofi Kingston can win a gauntlet match against Samoa Joe, Randy Orton, The Bar, and Rowan then he will carve his spot in a WWE Title match at WrestleMania 35.

The Miz will get his chance to answer Shane McMahon’s WrestleMania challenge. The match is set for the show of shows and now these former tag team champions will finally do battle. We will just have to wait and see how WWE builds this feud.

Sasha Banks and Bayley are going to be in the house tonight and they said last night on RAW that it will be Iiconic. Therefore, we could very well get some more momentum in a WrestleMania WWE Women’s Tag Team match.

We will probably hear from Becky Lynch as she gears up for her WrestleMania match against Charlotte Flair as well.

WWE will have a loaded show tonight, but a majority of the night could likely be the gauntlet match that will kickoff the show. Because those matches can get pretty lengthy.

The Miz opened up the show this week despite the fact that WWE advertised that the gauntlet match would open up the show.

The Miz started out by talking about some heelish things he’s done in the past and he got a “Miz” chant from the crowd which he thanked them for. He brought up his dad and said his dad has never said “I love you and I’m proud of you” until it was in a WWE ring during this angle.

He said that people warned him about Shane and he didn’t believe them. Then McMahon attacked him in front of his 68-year-old father. Then he put his hands on Mr. Miz and shoved him down.

The Miz was showing some A-List acting skills as he said Shane is “rotten to the core just like his father.” He said that he’s a McMahon so he’s the worst. He may own this company, but Vince doesn’t own Mike Mizanin and “you sure as hell don’t own Kofi” and then the “Kofi” chants started big time.

The Miz said that he wasn’t born rich and he was destined to flip burgers in Cleveland. He proved everyone wrong and found his way in the real world. He did it and he did it on his own.

He said hard work beats talent when talent doesn’t work hard enough. He earned the fans’ respect and it took 13 years but he thinks he has earned it… and he has. Insert “you deserve it” chants here.

“You’re damn right I do,” Miz said. Then he said Shane deserves something he earned himself “an ass whopping from me at WrestleMania.”

Billie and Peyton had a chance to cut a fun little promo about Sasha and Bayley finally being on SmackDown Live. Then they threw a pop culture reference saying that they look like two girls who had their mom buy their way into school. What?

Billie Kay and Bayley started things out and then Banks took the tag to pull off an awkward double team move on Billie before Lacey Evans came out and she got a pop.

Evans came walked to the ring and then she simply turned around and left again. The IIconics pulled off a blind tag and Peyton almost got a pinfall.

Later on, Kay hit Bayley with a kick when she wasn’t looking on the outside and then Peyton rolled Banks up for a pinfall and Kay help onto Payton’s arms so Banks couldn’t kick out. 1-2-3 and the IIconics win.

Becky and Charlotte came out and he gave a rundown of events. He said that Ronda isn’t there, but Charlotte is as he talked to Becky. He was trying to stir trouble between the two of them.

Eventually, KO got Becky and Charlotte to brawl.

Daniel Bryan cut a promo saying Kofi doesn’t deserve to be in the match.

Then Kofi faced Sheamus first who he beat in about 10 minutes. Cesaro came out next and he was defeated after a bit. Then Rowan came out and hit Kofi with a chair pretty early on and he got DQ’ed.

Rowan put Kofi through an announce table before he left. Then Samoa Joe came down to torture Kofi and beat him senseless. Then Kingston pulled off a miracle pin and got the win.

Randy Orton came down next to finish off the job. It didn’t look good for Kofi Kingston at about 40-minutes into this match.

Kofi avoided an RKO and Kingston hit a Trouble In Paradise, but Orton rolled outside of the ring.

Eventually, Kofi rolled Randy up for a pinfall and won.

Suddenly, Vince McMahon came out and said that he has to beat Daniel Bryan before he can get his WrestleMania title shot. Bryan started out with knees and kicks in the corner.

Then Kofi fought back, but took a knee to the gut. Then Bryan hung Kofi in the tree of woe and kicked the stuffing out of him. They went for a superplex and Bryan hit it for a two count.

Bryan got the LeBell Lock on Kofi, but Kingston fought out of it. Bryan hit some yes kicks and Kingston hit an SOS for a two count.

Suddenly, Bryan moved out of the way of a splash and stomped on Kofi’s head. Then Bryan nailed a running knee and won the match.

So Kofi Kingston is not going to WrestleMania after all.