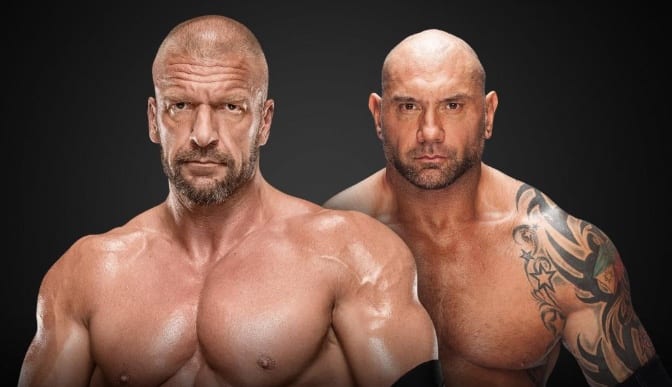 As seen on Sky Bet, the betting odds for Triple H vs Batista at WrestleMania 35 have been released.

This match has been building up for a few months now on WWE television, although in reality, Batista has been campaigning for one last storyline against The Game for much longer. Now, he’s finally got his wish as he gears up for a showdown with his former mentor on the grandest stage of them all.

Batista has been playing off of the fact that HHH has never beaten him in a one on one encounter, although many fans are expecting that to change when they meet at MetLife Stadium.

As it turns out, that’s what the bookmakers believe too. Triple H is the 1/3 favourite to walk out of Mania with the win, whereas Batista is the 9/4 underdog.

The match will be contested under No Holds Barred rules, which certainly feels like the right direction to go in. After all, these two men have always functioned well under more loose rule sets, and this match will be no different.

Their first WrestleMania match against one another took place at WrestleMania 21, when Batista came out on top and won the World Heavyweight Championship. Now, 14 years on, a lot has changed – but the one thing that has remained the same is the intrigue fans have over this storyline.

Many members of the WWE Universe have complained about two part time wrestlers getting such a featured spot on the grandest stage of them all, but once we see the match for ourselves, it doesn’t feel like there will be quite as many complaints.