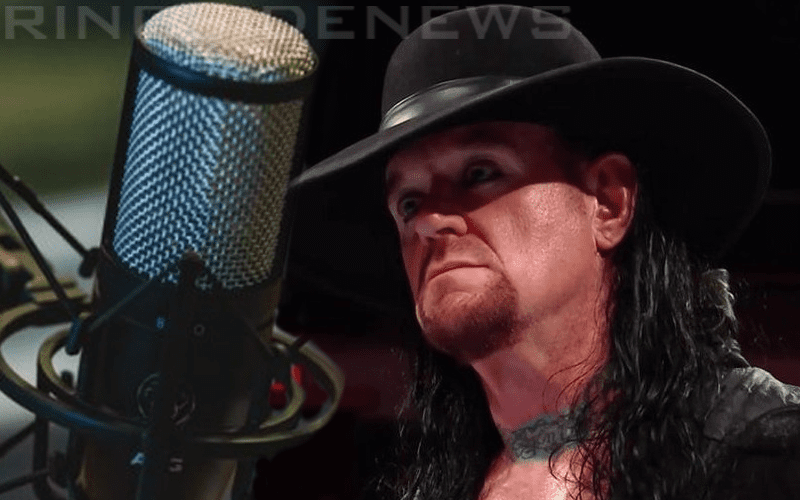 The Undertaker is a very interesting person right now because his in-ring career seems to be coming to an end, but his public appearances are just kicking up. During a recent episode of Total Engagement, Matt Koon interviewed Conrad Thompson who is in the news way more than he thought that he would be for signing The Undertaker to appear at Starrcast.

Conrad explained how The Undertaker’s appearance at Starrcast came out. He wanted to swing for the fences so he gave the Dead Man a call. He went on to explain that if you know who to call and are willing to put up the cash then you can have The Undertaker show up where ever.

Conrad was asked about the recent “Dead Man Talking” trademark that he registered and if it could have a connection to The Undertaker having a future podcast.

Thompson said he copyrighted it because it is a “cool name” and he went on to say that he thought about doing it years ago and just now filed it. There is already another podcast called Dead Man Talking, but it has nothing to do with pro wrestling and Thompson admitted that he probably won’t even be able to get the trademark approved.

Then he was a bit coy about whether or not the name could be used for any type of appearance for The Undertaker or another event associated with Starrcast.

Conrad Thompson made it very clear that The Undertaker is still a contracted employee of WWE so him appearing at Starrcast was just for pictures and autographs. He stressed that people are making it out to be a bigger deal than it really is and the thought of Vince McMahon changing things in WWE because of him signing The Undertaker for an appearance was mindblowing. He said that Dave Meltzer is blowing things out of proportion as well.

It is rather interesting to think about Taker doing a podcast and we can only imagine what kind of stories Conrad Thompson might be able to drag out of The Undertaker. Thompson is about to launch a podcast with Jim Ross as well so he has his plate full with his multiple podcasts, putting Starrcast II together, and running his mortgage business.