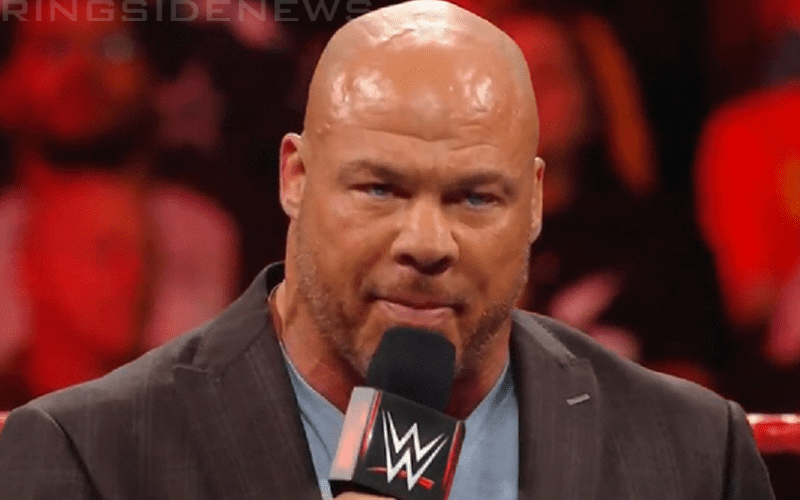 Kurt Angle announced last week that he had something to say on RAW’s February 4th episode. Nobody was sure what Angle would say, but all they knew was that it would concern The Olympic Hero’s future in WWE.

When Angle’s music hit, the crowd was more than ready to chant “You Suck” to show their respect to the WWE Hall Of Famer. He was in street clothes and entered the ring as Michael Cole said Kurt Angle has hit some hard times since being removed as RAW General Manager.

Angle said he lived his life by the 3 I’s and it worked. He mentioned his past accomplishments including soiling the ring with milk during “one of the greatest segments in RAW history.” Then he briefly mentioned Jason Jordan being his son before moving on quickly.

He got everyone to chant, “You suck.” Then he said lately he’s been dealing with the 3 D’s “doubt, defeat, and depression.” He addressed his recent losses against Drew McIntyre and Baron Corbin. He said in his career he’s beaten them all and won a gold medal with a “broken freaking neck.”

Angle said there is one opponent he cannot defeat… father time. He said “there comes a point in an athlete’s career where he has to decide” — then Baron Corbin came out.

Corbin asked Angle to wrap things up. He said Kurt did this to himself and we should have heard this speech two years ago at the WWE Hall Of Fame. Then Corbin called Angle him a “broken down shadow of a man.”

This upset Angle so he got ready for a fight. Then Drew McIntyre entered to a massive amount of heat. Drew talked about how he beat Angle. He put him over slightly for never quitting.

Then they both rushed the ring to attack Angle. Braun Strowman entered and chased the heels around the ring. Braun almost murdered Baron Corbin by heaving a desk chair at him and then they ran off through the crowd.

Angle never got to give his big announcement. It looks like we might have the rest of that on another episode of RAW. Because when we came back from commercial break, Michael Cole announced that a tag team match would main event the show featuring Braun Strowman and Kurt Angle vs Drew McIntyre and Baron Corbin.

During the main event match of RAW, Angle took a beating including an Angle Slam from Drew McIntyre. Then Braun Strowman got the tag and did well for himself until the heels laid a beating to him.

Strowman pulled off a very messy double suplex and tagged in Angle. Suddenly, Braun attacked Corbin who was the legal competitor and the referee called for bell.

This didn’t stop Braun who sent Corbin into the barricade. McIntyre laid in a Claymore Kick to Strowman and sent him into the crowd. Then Corbin and McIntyre beat Kurt Angle down.

The heels brought the steel ring steps into the ring and just as they were about to finish Angle off, Braun Strowman jumped in to put a stop to it and laid both McIntyre and Corbin out with slams on the stairs.

The night when Kurt Angle teased retirement ended with him celebrating with Braun Strowman. It looks like Kurt Angle might have more gas in the tank after all.