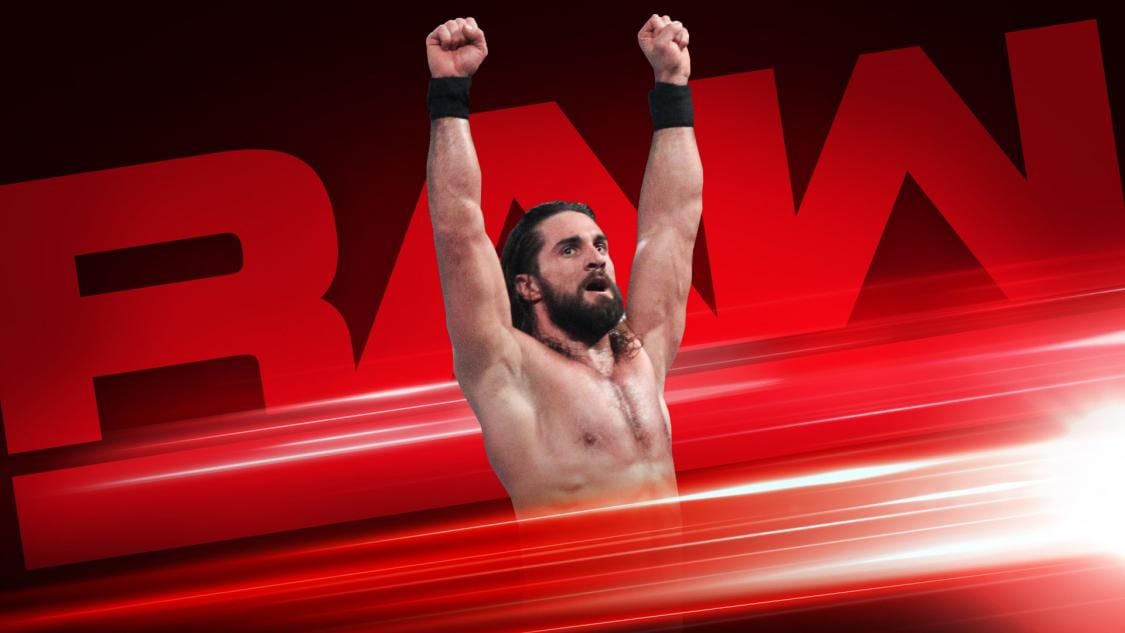 Last night was the Royal Rumble and, as always it was a monumental show. Maybe it didn’t please everyone, but I thought it was a great event all around. Obviously the two big stories, as pertains to Monday Night Raw, is that Brock Lesnar retained his Universal Championship over Finn Balor, and Seth Rollins won the men’s Royal Rumble match! These two are on a collision course ahead of this year’s WrestleMania, although there will be still be the Elimination Chamber in the meantime, so a lot can change.

Ronda Rousey retained over Sasha Banks in a really good match at last night’s show. Now that leaves Rousey without an opponent, but obviously we think Becky Lynch may challenge Ronda and make the move over to Raw. That said, it’s a little too early for all that, so perhaps Ronda will find a new challenger in the meantime.

Also on last night’s show, The Revival and AOP failed to earn title shots against Gable and Roode, and lots of smaller stories were furthered in the Rumble matches themselves. Tonight we’re getting Kurt Angle Vs. Baron Corbin, Braun Strowman Vs. Drew McIntyre, and qualifying matches for the women’s tag team Elimination Chamber match. The Road to WrestleMania is firmly underway, and tonight should kick things into gear.

The WINNER of the 2019 #RoyalRumble is here! @WWERollins #Raw pic.twitter.com/W9Tno9pGPJ

Rollings comes to the ring and Phoenix is in fine voice, chanting “Burn It Down”. Seth says last week 30 guys would go into the Rumble match and lay it all on the line, for the chance at immortality. He said the reason he would outlast them all, was his heart and determination. And tonight he’s standing here, and can say Seth Freakin’ Rollins is going to the main event of WrestleMania. The fans chant “you deserve it”. Seth says he would promise himself that if he won the Royal Rumble he wouldn’t point at the sign, but he says it’s a once in a lifetime thing that so few people get to do. Rollins starts to get a lump in his throat and says all he ever wanted to do in his life was grow up to main event WrestleMania. But winning the Rumble was just the start, now he has a big choice to make. On one hand, he could turn to SmackDown Live and challenge his good friend Daniel Bryan for the WWE Championship. While his other option takes him right to Suplex City, where he faces Brock Lesnar for the Universal Championship. He says he will have to mull over that decision.

Seth is interrupted by a ghost from his past, The Game, Triple H! HHH allows an “NXT” chant to swell. He smiles and says he’s glad Seth pointed at the sign, because he may have regretted not doing it. He says a while ago he challenged him not long ago to bring back the real Seth Rollins. He says Seth came out here tonight and got him all emotional, like two grown men blubbering, but he’s so proud of Rollins for making it. He says the Royal Rumble challenges everything in a Superstar to see which one has it in him. And that one, is Seth Freakin’ Rollins! “Burn It Down” from the fans again. HHH reiterates that Seth has a decision, as to who he will burn down at WrestleMania, but like Becky Lynch has the same decision to make. He says Becky has to make her decision tomorrow night, but Seth has to make his tonight. Triple H says they need to know, because the machine moves fast. He says Seth has until the end of tonight, but both Bryan and Lesnar will be here and he needs Rollins to tell him whose ass he’s going to kick at WrestleMania. The fans chant “slay The Beast”. Rollins says it’s going to be one of the hardest decisions he’s ever made but if it’s gotta be done tonight…

This is @TheDeanAmbrose. He’s always right on time for disruptions. #Raw pic.twitter.com/mvnU98cr7F

Dean Ambrose comes to the ring. Ambrose reminds Seth of where he came from, saying Triple H didn’t believe in him. Says HHH wanted to get rid of him. While he always believed in Seth. Triple H interrupts him, reminding everyone that Dean turned on Seth the same night Roman Reigns had leukaemia. Ambrose turns to HHH and says this doesn’t concern him, to which The Game says everything in the ring concerns him. Ambrose says Seth has changed, he’s a kiss-ass now. But he can move along knowing that he was never able to beat Dean Ambrose. Seth could never beat him without the help of Corporate Kane, J&J Security, or Triple H himself. He tells Triple H to make the match for tonight. Triple H turns to leave but Ambrose meets him on the apron and asks if he needs to ask Vince’s permission first. The fans chant “Yes he does!”, but Triple H says get a referee down here now. The match will take place after the break!

We’re back and the match is already underway. Rollins with a snapmare and kick to the chest. They brawl to the outside with Rollins chopping at the chest of Ambrose. Rollins jumps off the barricade to with a clothesline to Ambrose. He tosses the former IC Champion back into the ring.

Ambrose slams Rollins down by his hair and unloads mounted right hands. Rollins fights to his feet and levels Ambrose with a superkick. Ambrose avoids a Curb Stomp, eats a kick through the ropes, Rollins attempts a sunset flip, Ambrose hangs on, jumps down and tosses Rollins into the ring post. Ambrose gets an STF applied. Rollins breaks free and unloads more chops. Rollins looks for a suicide dive but Ambrose jumps up and punches him before he can fly. Ambrose gets back inside and hits a facebuster for a near-fall as we head to the break.

Rollins and Ambrose exchange chest chops to the cheers and boos of the fans. Rollins ducks a clothesline and catches Dean with a slingblade and the lunatic rolls from the ring. Seth follows-up with a suicide dive, followed by a second!

He gets Ambrose back inside and looks for a Falcon Arrow but Ambrose slides down his back. Seth knocks him from the ring and hits another suicide dive – although Ambrose barely sold it. Seth gets him back in the ring, goes up top, and looks for a frog splash but nobody’s home and Dean rolls him up for a near-fall.

Ambrose is getting frustrated and grabs Seth for Dirty Deeds but Rollins dodges and hits the Ripcord Knee, followed by a Buckle Bomb, Avada Kadavra and The Stomp for the win!

Rollins sold The Stomp like Rock used to sell The Stunner. Later tonight, Rollins must make his choice between Daniel Bryan and Brock Lesnar.

Also tonight, Kurt Angle Vs. Baron Corbin, Drew McIntyre Vs. Braun Strowman, and an open challenge from Ronda Rousey. We see the new Women’s Tag Team Championships set on a pedestal at ringside.

We’re back and Dean Ambrose is still in the ring, he’s sitting on a chair with a microphone. He says he has something serious to say. “When I signed for WWE…” but then he’s interrupted by Nia Jax and Tamina.

The two women come to the ring and comes face-to-face with Dean Ambrose. Nia hits him from behind, knocking him out of the ring. Officials prevent Ambrose from getting back inside. I hope this mixed-gender thing doesn’t become common, it’s super unrealistic. Ambrose walks up the ramp and out comes Mickie James and Alexa Bliss for their match.

.@NiaJaxWWE has shown she CLEARLY isn’t afraid of a challenge. #Raw pic.twitter.com/eIqcCONVlb

It’s confusing who we’re supposed to root for here, because Jax and Tamina are obvious heels but before the match we got a promo from Bliss in which she called them pigs.

We start things off with Tamina and Alexa Bliss, and The Goddess does her best to shove Tamina. Bliss grabs Tamina by the throat but the Samoan shoves her back and onto her back. Alexa hits a nice arm-drag kip-up, and a knee-first moonsault. Tamina tags Nia Jax, who slams Alexa into the corner, knocking Mickie off the apron.

We’re back in time to see Alexa miss a moonsault and get superkicked by Tamina. Nia applies a sleeper to Alexa. Bliss fights up and catches Tamina with a sunset flip pin but Tamina kicks out and clotheslines her down. Nia tags in and hits a hip attack in the corner, before pinning Bliss there with her ass. She drags Bliss by the foot into the air and slams her down. Nia grounds Alexa with a modified chicken wing.

The fans chant “RKO” at Nia as Alexa climbs to her feet. Nia slams her into the turnbuckles and tags Tamina. Snuka headbutts Alexa, who crawls to the corner. Alexa kicks Tamina and does another sunset flip pin attempt to no avail. Bliss looks to tag Mickie but Tamina knocks the veteran from the apron. Bliss ducks Tamina and finally tags Mickie.

James comes in with a senton to Tamina, followed by a rope-assisted hurricanrana, and a neckbreaker for a two count. Mickie ducks a superkick and hits the Mick Kick. Jax tags in and Mickie looks for a DDT but Nia just tossed her off. Jax lifts Mickie onto her shoulders, looking for a Samoan drop but she spots Alexa on the top rope, so she grabs holds of her and has both them on her shoulders! Nia walks around and does a squat before hitting the Samoan drop for the win.

Nia and Tamina are the first team to qualify for the women’s tag team Elimination Chamber match. Two more spots from Raw remain, and we’ll see a match tonight with Natalya and Dana Brooke taking on Sarah Logan and Liv Morgan.

Kurt Angle did an interview earlier today, in which he blamed Baron Corbin for him losing his job as General Manager. The interviewer reminds Kurt that he was humiliated by Drew McIntyre the last time he had a singles match, and asks if he thinks the same thing will happen against Corbin tonight. Angle says it took him a while to get over that loss to Drew, but he’s waited a lot longer to face Baron Corbin, and tonight he makes it worth the wait.