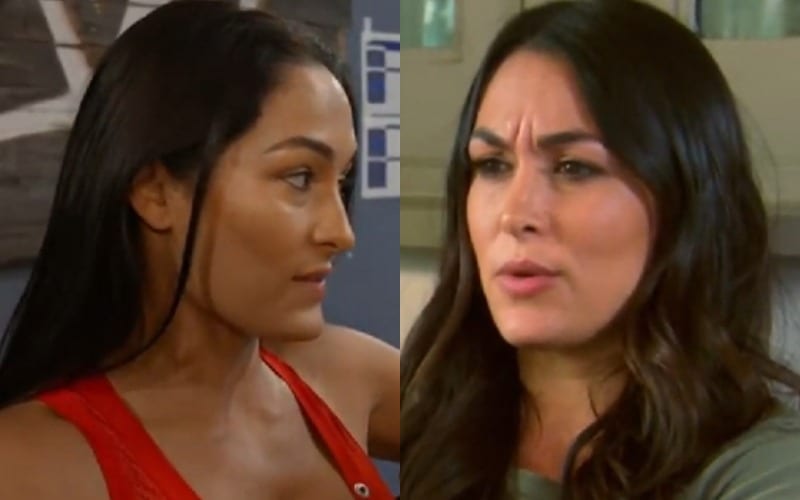 Nikki Bella and John Cena are no more and this was one of the main reasons why Nikki felt the need to move to Los Angeles. She was previously living in San Diego, a city that Brie Bella and Daniel Bryan moved to in order to be closer to Nikki.

When Brie Bella told Daniel Bryan that Nikki was moving to Los Angeles, it bothered Daniel. It primarily irritated him a bit because they moved to San Diego to be around Nikki.

Brie admitted that she couldn’t keep up with her sister’s free spirit and it seemed like she was trying to re-live her 20’s.

Later on, Brie asked Nikki over lunch how many times she and Bryan had to move for Nikki. “It’s always about you, right?” she asked. You could tell that Brie was gettering to the point of being over it.

Things got even worse for The Bella Twins over drinks with their mother and step-sister. Brie was late and they had a little fun talking and Nikki said she hopes Brie isn’t “a b*tch.”

It didn’t get much better as the awkward conversation continued and the tension over Nikki’s move built. Brie Bella was trying to drive home the point that she and Daniel Bryan did move to be closer to Nikki in San Diego during her time of need.

“You should have bought a house next to me,” Brie joked. Then Nikki said Brie was making it all about her.

The Bella Twins were trying to take pictures for their clothing line, but things were still tense. Then they got a call from WWE about being a part of WWE Evolution and that seemed to ease the tension between the twins. Brie asked if they could be on the same page. “We can try,” Nikki replied.

Later on, at their sister-in-law’s baby shower, both Bellas got a little tipsy at 1:00 PM. Then they made up at the bar and apologized. So everything is still good between the two of them for now.

Brie said it’s okay that Nikki is moving to LA now, but that won’t stop her from missing her sister.