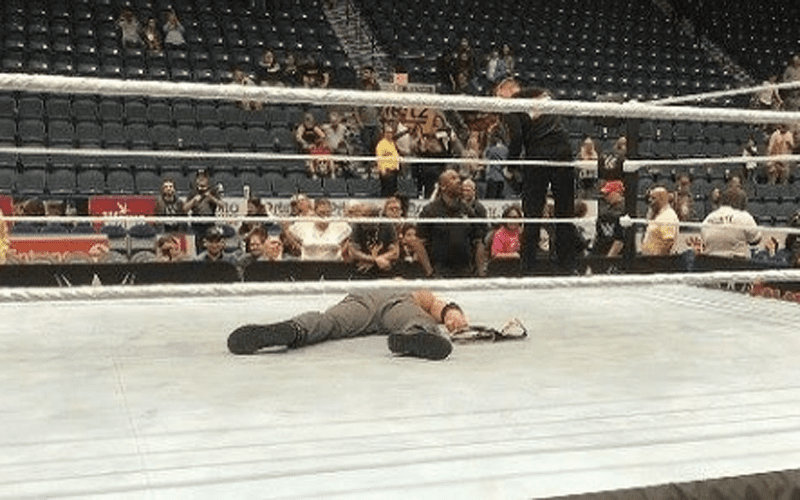 WWE Superstars leave it out in the ring every single night. Stars like RAW’s Seth Rollins and Dean Ambrose are some of the most beloved competitors to grace the squared circle in recent years.

Given their rivalry over the WWE Intercontinental Championship appears far from over, the two have been competing against one another for the Championship at live events- and during the latest RAW live event, the two had an interesting interaction to end the show.

According to 434, Ambrose defeated Rollins to retain the Championship. After the match, Rollins would hit the Champion with a Curb Stomp. This is where the situation would get interesting.

Rather than getting up and nursing his injury wrestlers typically do moments after being taken down, Ambrose decided to lay in the ring for over fifteen minutes as the arena emptied of all the fans.

If that wasn’t enough, the ring crew would make their way down to the ring and started to disassemble everything. How’d Ambrose react, you ask? He didn’t. He laid there. In peace.

You can see Ambrose at the event in the Instagram post by 434 below, which shows the arena almost empty, as crew work on packing up. Ambrose is still laying there.

Have you ever experienced anything similar at a live event? Do you want to see more moments like this? Let us know your thoughts, opinions, and reactions in those comments down below.