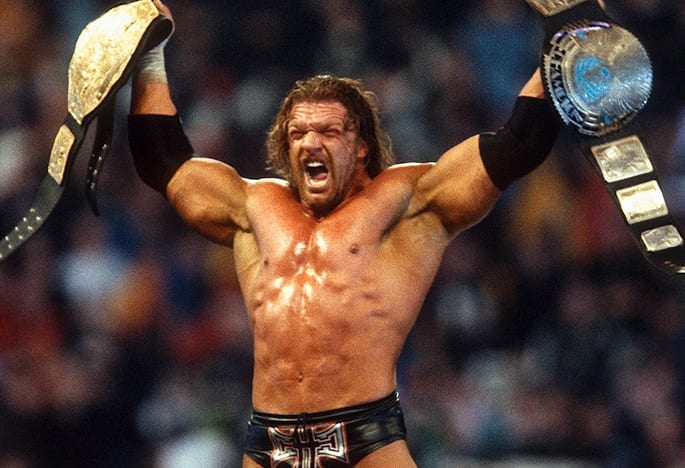 WWE has a history of making big plans and then for whatever reason things just don’t work out. Sometimes a smaller plan needs to be changed around, but other times the idea is so huge that it reshapes the very structure of the company’s roster.

The plan from the very beginning from the formulate stages from the moment we decided to split the titles which finally happened once and for all sign the dotted line the week or week and a half after Vengeance that year heading into Summerslam was that Rob Van Dam would be the first World Heavyweight Champion and that he would beat Triple H who would be the #1 contender, Van Dam would be the Intercontinental Champion, he’d win the World Heavyweight Title and then the plan, because we were planning on having that WWE Title parked on Brock Lesnar for the long haul”

“I mean, there was never even a remote discussion until three weeks before Survivor Series of him losing that title anytime before WrestleMania 19.”

“New blood, and here we were in 2002. What we always knew was that in our back pocket our out plan for the whole thing we always knew we had in our back pocket if worse comes to worse if we split the titles and there’s backlash that it doesn’t work or whatever, we’ll just pop a buy-rate and we’ll have Brock face RVD in a unification match at WrestleMania and we’ll pretend that the whole thing never happened.”

This planned storyline didn’t work out and it was eventually dropped. WWE had to change their plans which is nothing new for them, but it was a huge change. Vince got cold feet about splitting the WWE Championship and part of it was because Triple H vs Undertaker had recently fallen flat.

Vince McMahon had a lot of people behind the scenes pulling for him to carry on with his original title split plans. RVD turned out not to be McMahon’s choice due to a suggestion hinted to be made by Triple H that, “winning a title that didn’t exist the day before is a heel thing to happen.”

Therefore, WWE changed their mind because the heel thing to do would just be to award Triple H this new title and then have RVD chase the title and win it. Of course, then Triple H was handed the title and RVD failed to capture the prize at Unforgiven 2002. The backstage rhetoric was that Rob Van Dam wasn’t ready yet.

Rob Van Dam would eventually capture a top title in WWE, but it would take four years and he won it from John Cena. Then RVD would be forced to drop his Championship after being busted with marijuana.