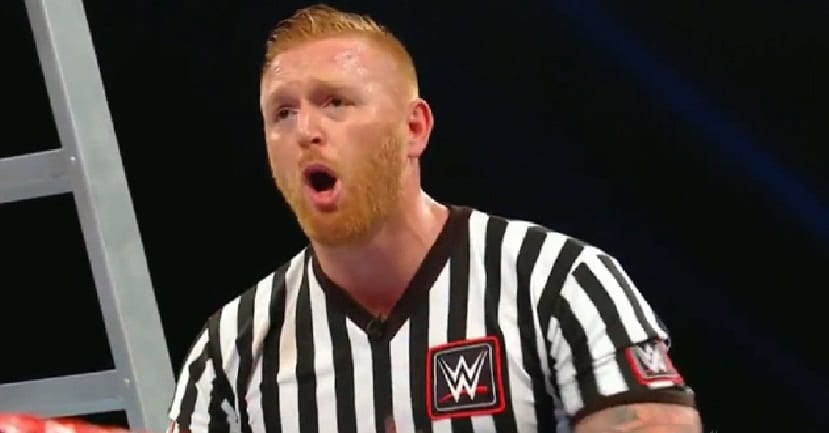 It was interesting how Heath Slater was made the referee for the main event TLC match on WWE RAW this week. It was the go-home RAW before WWE TLC this Sunday, but WWE was getting a TLC match and an IC Title match out of the way early.

Heath Slater was turned into a referee last week and officiated his first match earlier in the night. During that first contest, he allowed Bobby Lashley to destroy Elias while he turned a blind eye. Michael Cole tried to get over on commentary that Heath had kids so he was only letting Bobby do whatever he wanted because Bobby is Baron Corbin’s friend.

Then came the main event of WWE RAW this week where Seth Rollins put his IC Title up for grabs against Baron Corbin in a TLC match marking the first time in six years when RAW had a TLC match.

Corbin and Rollins tore each other apart including Seth taking a hard table spot on the outside of the ring. Suddenly, as Baron was climbing the ladder toward the IC Title, Rollins whacked him with a steel chair. Heath Slater took an accidental shot and he tumbled out of the ring and sold like a referee. The crowd chanted “He’s got kids.”

Then Rollins got the upper hand and placed Corbin on a table before hitting a splash from the top turnbuckle to the floor. The crowd chanted, “Holy sh*t” that time.

Rollins started climbing up the ladder and then suddenly, Heath Slater was standing under the ladder and he pushed Seth over. Rollins sold the fall and rolled out of the ring while Heath Slater got Baron Corbin into the ring and helped him up the ladder to capture the IC Title. Suddenly, Rollins appeared again and powerbombed Corbin through a table in the corner.

Rollins gave Heath Slater a Superkick and then hit a stomp on Corbin before climbing up the ladder and reclaiming his WWE Intercontinental Title.

It looks like WWE might not have a new IC Champion tonight, but they do apparently have a new heel referee.