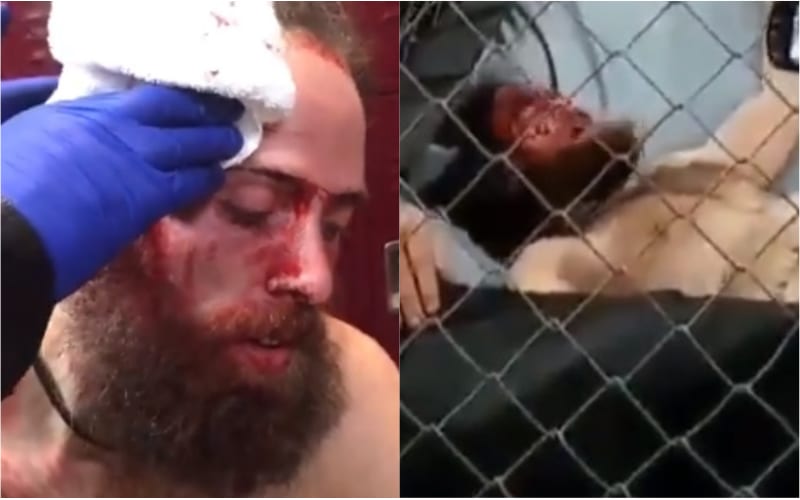 We previously reported Jack Pollock took a violent fall through the ring in the main event at a recent IWC indie show in Pennslyvania. It was a well-done spot after a grueling 2-out-of-3 falls match and Pollock detailed his experience for us.

Pollock told Ringside News it was a surreal moment in the first place because he has been a fan of the International Wrestling Cartel promotion for over fifteen years. His main event IWC World Heavyweight Championship defense against Wardlow was going to be dangerous enough, but it was about to take a very unexpected and violent turn. Then again, in that kind of situation, violence is usually expected.

“The whole night in itself was surreal for me because I grew up such a fan of IWC. I was going to shows fifteen plus years ago. Throw on top of that it’s the first ever Pittsburgh Pro Wrestling Classic, I’m walking into it the defending IWC World Heavyweight Champion, fighting in the main event knowing that I have to go to war with a monster who probably has fifty pounds on me that it’s really hard to explain everything.”

“Everyone is freaking out about the surprise cage match, and rightfully so but Wardlow and I destroyed each other for 25 plus minutes in the two falls before Plummer even had a chance to announce the cage. To have that last fall be a cage match, the same match I took the title from Wardlow this past summer was an incredible moment for everyone involved and all those in attendance. Was I surprised? Of course, I was.”

“I didn’t think Plummer had it in him to pull that trigger. There was a moment that I was on Wardlow’s shoulders, trying to get the blood out of my eyes and I looked to the crowd and took it in. It was then I realized my fate and accepted it.”

“The next thing I know I crashed through the ring and the crowd went nuts chanting “holy sh*t, holy sh*t”. I nearly broke my body to keep the IWC World Heavyweight Championship. Two days later I’m still in the worst pain of my life, my head is still bleeding a little but I wouldn’t change anything…except me winning that is.”

This kind of spot in professional wrestling makes things special when it comes together just right. For Pollock, it was a bloody battle in front of a packed house and a hard-fought loss. Pollock’s stablemates JaXon Argos and RC Dupree also lost that night making it a tough one for Team Storm.

The live crowd was not expecting a steel cage to cap off Pollock’s war with Wardlow, but they really didn’t see the end coming either. Pollock is sore and beat up with cuts that are still fresh, but now comes the next step after his plunge in Pittsburgh.

The king is dead, long live the king!
@Wardlow_1@JPollsBeard pic.twitter.com/dHf6BGDQqW

2018 can be summed up in 3 words… "Team Storm Takeover". But at The First Annual Pittsburgh Pro Wrestling Classic, we saw the Fall of Team Storm. What does the future hold for @JPollsBeard, @JaXonArgos , & @TheRCDupree? Can they keep it together? Can they bounce back? pic.twitter.com/NdqDQKwPNq