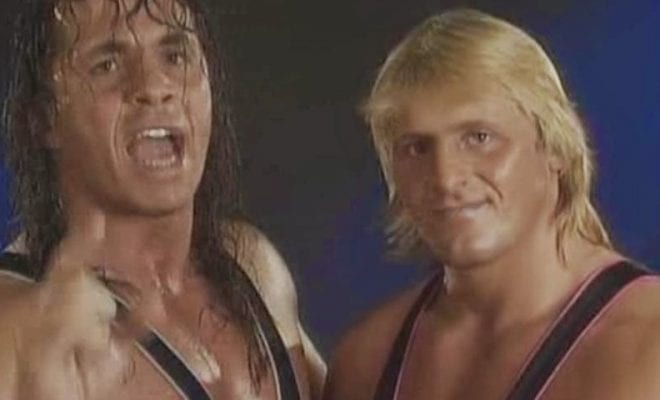 Bret Hart exited WWE after the Montreal Screw Job at the 1997 Survivor Series. He left a lot of fans behind and his brother Owen Hart who was still under contract. Bruce Prichard remembers the backstage climate during that time and recently disclosed on Something To Wrestle With what Owen Hart’s mindset was after his brother’s departure.

Prichard said Owen made up his mind pretty early on to remain with WWE, but the WWE fans didn’t know that. He made a big surprise splash at In Your House: D-Generation X and Owen decided to sign a new deal in the midst of some heavy tension between McMahon and the Hart Family. He did it for his family and didn’t want to take a chance on anything other than WWE as Bruce Prichard remembers:

“Most of the contact was between Vince and Owen. I had talked to Owen just to find out where his head was and everything. Where he kinda fell in the fallout from Bret. Owen had the same mindset of ‘Bret’s not gonna take care of my family and this is what I’m used to, I’m home here in the WWF.’ Most of if not all of the negotiations were done with Vince McMahon.”

Owen Hart re-signed with WWE and wrestled with the company until his tragic passing. At times it’s hard not to think about how different WWE would be today if Owen’s zip line hadn’t malfunctioned at Over The Edge in 1999. He was loyal to WWE and proved it by remaining with Vince McMahon rather than seeing what the pro wrestling world had to offer during the Monday Night Wars.