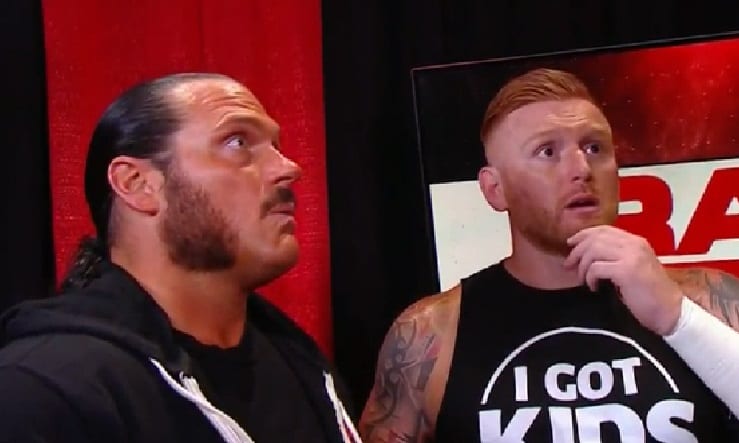 Heath Slater and Rhyno were the first-ever SmackDown Tag Team Champions, but since their move to RAW, it’s been hard to peg them for winners. In fact, it’s hard to see them at all because they’re almost never on the show. Then it all seemingly came to an end for the team on RAW this week.

Baron Corbin called Slater and Rhyno to his “office” backstage this week and set up a match between the two of them. After explaining that apparently, they’re dealing with a packed roster on RAW, he said the loser of the match would also be fired from the show.

When the time came for a match, Slater won a match that lasted no more than a minute and a half. But it was done, and Rhyno was apparently fired. To make matter worse, Baron Corbin handed Slater a referee shirt backstage meaning it looks like Heath isn’t a wrestler either because he’s an official.

“Everyone, my heart is broken. I have been partners with Rhyno for three years and it came to an end tonight on Monday Night RAW,” Slater wrote on Instagram. He said he didn’t want this, but he has kids so it had to happen because Heath can’t afford to lose his job.

It will be interesting to see what happens next in this unexpected situation, that’s for sure.

Everyone!!! My heart is broken. I have been partners with @terrancegerin for almost 3 years and it came to an end Tonight on #mondaynightraw. #igotkids #didntwanttodothis #heartbroken #upset #damnit @wwe