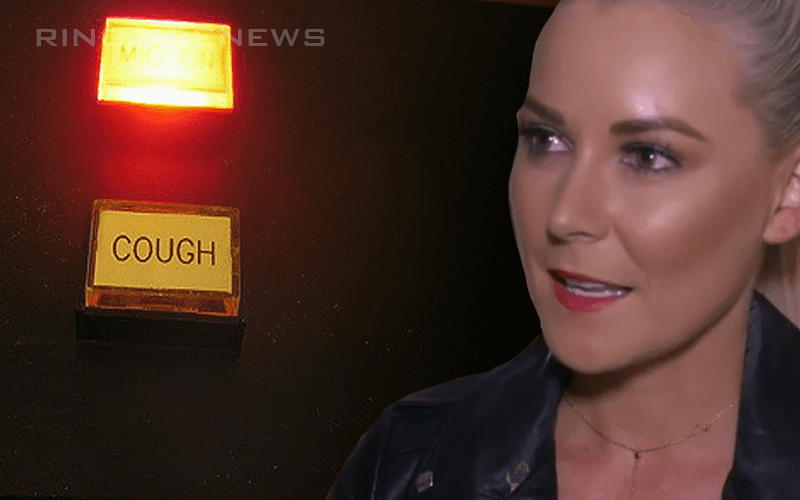 Renee Young’s tenure as an announcer on Monday Night Raw has just gotten started, so there is naturally a learning process that needs to be considered for any new job. But when you’re on national television, it’s kind of a different situation.

Not only does Renee have to keep in mind the verbiage that WWE gives her to say on her microphone, but she also has to remember that millions of people can hear everything else that mic picks up. This has apparently presented a pretty big issue at times for Young — especially when she can’t find her cough button that kills her mic. After all, a cough button is nice to have because it mutes the audio on a microphone, but it’s only useful if you can find it.

While speaking about her job on Regular Girls, Renee Young did reveal that she has a cough button. But it didn’t help her when she needed it until WWE took it a step further to make sure that Young knew where her cough button is.

“I feel like if I was like pregnant and doing commentary and I’d have a barf bucket next to me and I’d have to hit my cough button to puke. Yeah, I’ve got a cough button. So I often forget to use it. Or I couldn’t find it for a long time. So at the top of the third hour I always get like a sugar-free energy drink and I didn’t think you could hear it and I cracked it open during the show and you could hear it during the show. I was like, ‘Oh sh*t, my bad.'”

“So our audio guy had to put like a giant highlighter green button over my cough button so my dumbass could find it. Found it. Yeah, it’s great I’d always be like searching under the desk and I’d be like, ‘I don’t know where it is!’ Or like adjusting my headset and everyone could hear it. Guys, I’m a newbie, I’m an amateur. I don’t know what to tell you.”

Some are under the impression that WWE is downplaying Young’s role on WWE television already with a multitude of nonsensical things to say coupled with the fact that she can admit that she’s married to Dean Ambrose but she doesn’t know what he’s thinking. They are also pretty confusing at times when it comes to giving her direction. But only time will tell how much different we will feel about the situation in a month from now.

With the way things change so frequently in WWE, you never know what kind of stories might pop up that could put Young in a better light, but at least she’ll be able to find her cough button so we don’t hear the next time she pops open an energy drink during the third hour of Raw.