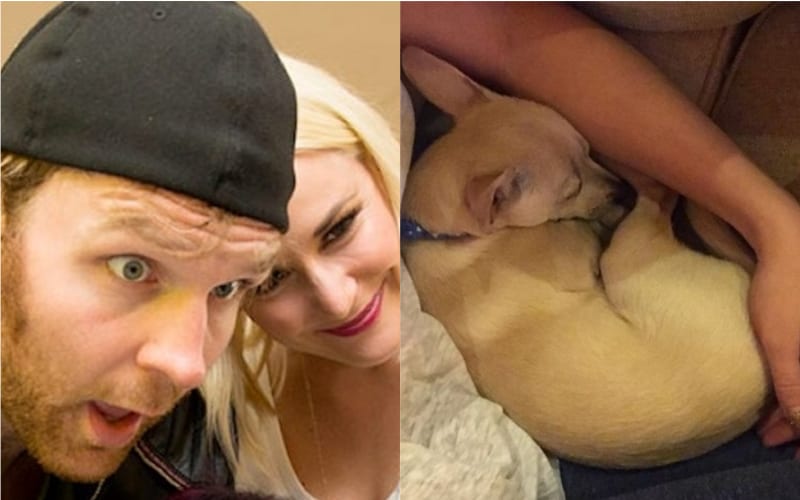 We previously reported that Renee Young and Dean Ambrose adopted a new dog, but they didn’t take the decision lightly. However, as Young described the process on Regular Girls, much of the responsibilities fell on her as Dean Ambrose had already taken off on the road due to his busy WWE schedule.

Renee Young said she was sure it was confusing for some people because she had posted a picture of her mother’s dog and some people jumped to conclusions that she got a new dog. But she explained that her and Dean, who she calls by his real name Jon finally decided to add another member to their family.

“Yes, we finally pulled the trigger. We got another poochie. His name is Benny, he’s six-months-old. He’s a little Chihuahua mix. So we named him Benny, his real name is Benito, yeah he’s a very handsome little guy. He’s got this mouse head and these spindly little deer arms, yeah he’s very funny,”

“So I got him Saturday and Jon was already on the road. But we were looking at pictures of him online and we were like, ‘I think he’s the one, let’s get him.'”

Renee went to check Benny out at an adoption event, so she called the adoption agency and set everything up. After filling out an application, it took twenty minutes for Benny to arrive and $300 later, he was theirs. So far, Renee said their first dog Blue, who is a bulldog wasn’t too happy with Benny, but it sounds like they might be warming up to each other. If anything, Renee said if it doesn’t work, she can blame her Lunatic Fringe husband because he’s the one who picked him out.

“As soon a [Benny] jumped out of his little carrier, Blue made direct eye contact with me and pissed against the couch. Bad dog, bad dog. No good. Blue lives and breathes by the dominance rule. He wants to pee on everything. He takes all the bones.”

“It was really fun and then [Benny] was in the house and I was like, ‘Oh my god’ because I felt a lot of pressure because it was up to me to decide if he was good for our family.”

“What if he wasn’t, what if Jon came home and hated him? Even though Jon picked him out from the pictures so I still could’ve placed the blame on him.”

Renee said right now, both dogs seem to be picking Dean Ambrose as their favorite. She went as far to say if the new dog sides with Ambrose, then she’s going to have a problem because “Blue is obsessed,” with Dean.

It sounds like it’s just another day in the life for Renee Young as she adds another member to the Ambrose clan. It’s good to know they seemed to be getting along which was evident because you could hear the faint sound of dogs barking in the background while she spoke.