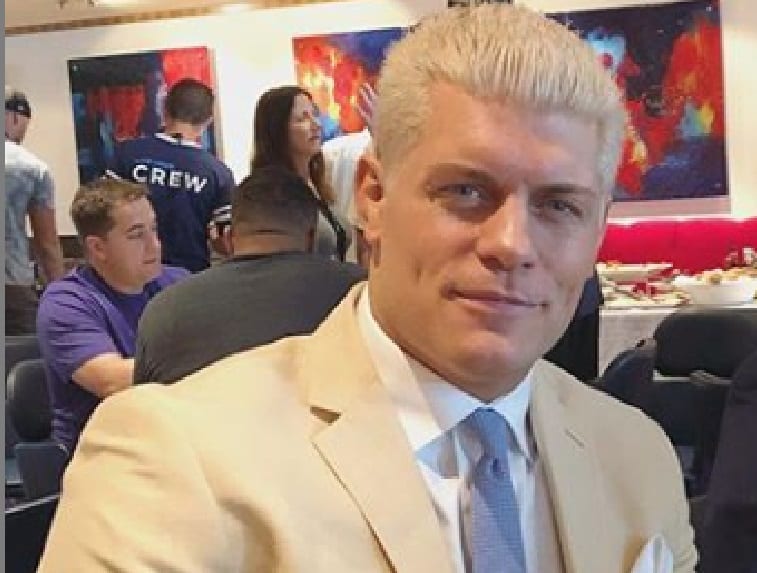 The Elite are a big question mark in pro wrestling right now because everyone wants to know what they’re going to do next. Even though we don’t know yet if I were a betting man it’s safe to say that it will be a big deal when it is announced.

Cody recently spoke to the AJ Awesome Show. It was obviously recorded before the NWA 70th Anniversary Show because the NWA World Heavyweight Championship is on the table in front of him. But AJ Awesome cut right to the big question as he asked Cody what his 2019 looks like.

“Well, I’m 33. I said I’d be done wrestling by 40 which is very unlikely. I don’t know. I couldn’t plan 2018 — 2019… I don’t know. I’d like to do more guest roles acting-wise. I think I’ve learned a little in that field and I want to expand upon that field not where it interrupts with my wrestling at all.”

“But also… I’ve got some big plans that I can’t discuss that will take up a lot of time and I’m very excited about starting that and it’s a different role for me in wrestling and I’m pumped for it.”

Cody said, “the clock stuff” on Being The Elite is an allusion to what he’s doing next and it’s a “[Steve] Jobs/Bill Gates type thing like ‘There’s no way we will ever do this. No way — who would think that?’ But I found some outlaw friends of mine who wanna do it — whatever it is that we’re talking about. But I’m looking forward to it. The clock for sure, watch the clock.”

This was one of the most in-depth explanations that Cody has given about what his plans for 2019 might be. It turns out that whatever he’s doing is going to be big — and he’s got friends to help. The only real question is who these outlaws might be.

Here's a sneak peek of Episode 62 with @CodyRhodes! AJ asks the question that is on everyone's minds lately… pic.twitter.com/4Q4aWauZjm