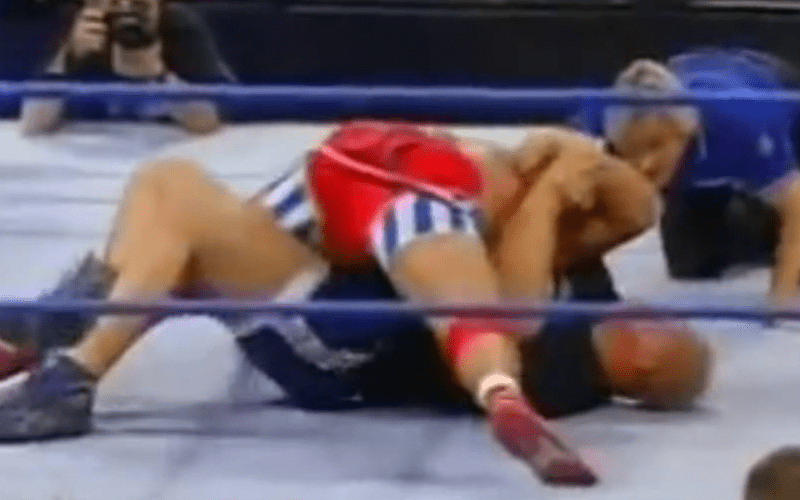 Despite being the winner of the fourth Tough Enough season, Daniel Puder, to many, is remembered as the man who infamously locked a Kimura Lock on Kurt Angle during an episode of SmackDown and attempted to break his arm on TV.

Using the platform provided by Robbie E on Why It Ended, Puder gave an explanation on his actions and what it was liked to be picked as a participant on Tough Enough in the first place. For context, the clip below shows an insight into that specific segment from SmackDown:

Puder revealed that he actually quit school to commit to the wrestling business, after being told by WWE that he had the best promo video for that season.

“I was actually picked to make the first 50, I was absolutely stoked. They said that I had the best promo video that they saw throughout every video, so I was shocked that I had the best promo video because I didn’t see myself as having a ton of personality I guess. I was never recognized at that. I think when I made the top eight, and it was in-person at Venice Beach, California. I remember I felt alive because it was something that I put 100 percent into. I literally dropped out of college for this. I put 100 percent of my effort into it. I actually went into the hospital about three weeks training into it before because I was so dehydrated because I was doing double days, going to college, I was really pushing it. Literally, when I went to Venice Beach, California I didn’t go back to school. I showed up to get my stuff but that was it. I am super blessed. I look back now it was one of the biggest life lessons that I have had in my 36 years that I have now on earth.”

Additionally, Puder claims he was undoubtedly the most motivated of all the competitors on that season. When Tough Enough wasn’t being filmed, Puder says he was the only one to stay around the WWE Headquarters to work out, while his fellow competitors would go out or travel back home until the next show.

“It was tape-delayed, we filmed on Tuesday, aired on Thursday then. We stayed in Connecticut. Actually, I was the only one that stayed there, so, all the other guys after Tough Enough went away wherever they went. They went home for a day or so but then they came back. I was the only guy that stayed in the hotel that showed up in the WWE Headquarters Gym. I was super committed. It is interesting because I committed 100 percent, and whenever I commit to something 100 percent like anybody I know on something, whenever you put the effort into it it is just interesting to see that, when you commit to something you see the results. I look at it at what is the value to them; there are five of them and most vision. The first one is they don’t understand the vision, most don’t have a vision for their life. They have no belief. They see it but they can’t actually visualize themselves. Second is purpose. Why do you want to do it? You want to do it so you can become famous or be cool. A lot of guys join MMA or pro wrestling is because they want to be somebody else instead of themselves. There is a connect to that; and I had a kid come into my school and I asked him why he wanted to become a CEO, and he said that he wanted to be able to take care of his family financially. That is purpose. Third one is mission, which is to show up and doing the moves, training and whatever. The fourth one is the team, getting used to the coach and setting up. But the last one is the hardest one, which is the commitment to follow through to get the results that you want. If you don’t have the first four then the fifth one will never come. What are you going to commit to? When we drive somewhere we use GPS, if you don’t have the GPS and the understanding of why you are going there you’ll never see the results.”

On the infamous segment, Puder refers to Angle as a ‘pansy,’ claiming he would have defeated Angle had it not been for referee Jimmy Korderas stepping in to pin Puder, despite his shoulders not being entirely down. Angle, of course, had been heated after that segment with Puder.

“They stated no striking but everything else goes, so specifically that was said. They just didn’t understand that I was a badass and I would have ripped Kurt Angle’s arm off like the pansy that he is. I mean, he is a wrestler, this is the difference. An amateur wrestler is not an MMA fighter, so at the end of the day he can show up and state that he is going to beat Daniel Puder up, but he is a wrestler, it is called a match, it is not a fight. Two different concepts, two different worlds, it is kind of like a motorcycle racing a Toyota; I am the motorcycle and he is the Toyota; much faster, much leaner, much younger, he is the old man, I was the young buck. He grew up and met his wife and had the all-American dream, but at the end of the day I beat him. I kicked his butt, they cheated, Jimmy Korderas saved his butt, saved his arm, and his career, I would have taken him that night because it was their rules, not mine.”

What was your reaction when you first saw this incident? What is your opinion on Puder, and this incident itself? Let us know your thoughts, opinions, and reactions in those comments below.

With H/T to Wrestling Inc for the transcriptions.