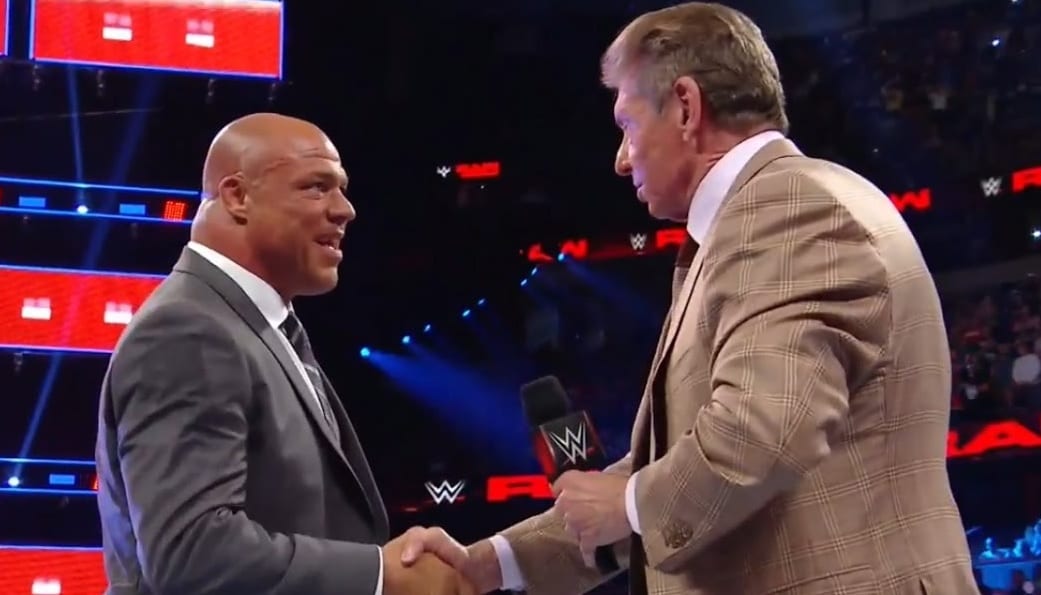 Kurt Angle is back in WWE and even though he’s the Raw GM at this point — he’s still on vacation and enjoying his time as he gets to wrestle in the World Cup Tournament at WWE Crown Jewel. But he spent a decade working for the competition at Impact Wrestling before coming home to WWE and he was met with a Hall Of Fame induction and plenty of love across the WWE Universe.

But Angle’s relationship with Vince McMahon wasn’t always great. In fact, he left the company initially on pretty bad terms but time heals all wounds and as he spoke to Al Arabiya English, he explained how that poor ending to his first WWE run turned into something special eventually as he made his way back to the WWE Universe once again.

“We had a terrible parting. A lot of it was my fault, but we didn’t speak for a long time. Coming back was—we both wanted it, but the timing wasn’t right until it happened when it did. Vince was always a father figure to me, so I always look to him as a father. He never stopped being that.”

“When I came back, he hugged me, said welcome back, you’re part of the family, and let’s forget what happened. We had a horrible day on the day that I got released—the day I asked for my release. It was a horrible day. Vince and I didn’t talk after that. It’s nice to have mended up, to have realized that we’re both bigger than that. We can move on. Vince has always been good to me, and he continues to be that to this day.”

We’re more than happy to see Kurt Angle back in the WWE Universe. Whether he’s wrestling or general managing, he’s still a highlight of any show. Thankfully, they were able to put the bad blood behind them and form a stronger bond that lasts to this day.